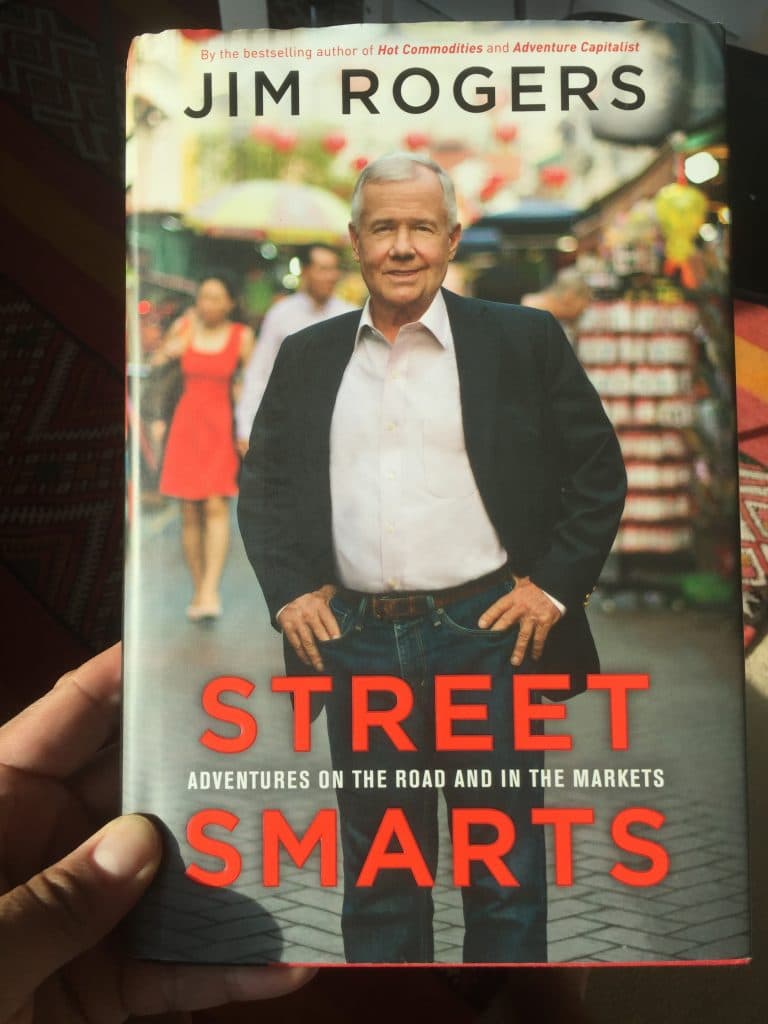 Jim Rogers is an investing legend. His Quantum Fund was up 4,200% when he retired at the age of 37. Since then, he’s taught at Columbia and travelled around the world twice setting Guinness World Records in the process!

Street Smarts is a book that opens your mind. It’s an exhilarating read. The opening chapters are a memoir, which takes you from his beginnings in Alabama to Yale to Oxford to the US Army to Wall Street and to Quantum. He’s definitely a man to listen to (unlike the likes of Greenspan, Geithner, Paulson at al. who Rogers excoriates).

Rogers thinks about not just the last bear market (2008) but about the dot.com crisis, the Asia crisis, the savings and loans crisis, OPEC, The Second World War, The Great Depression, the 1907 crash and so on. Don’t think about this news cycle; think about the next few decades.

Will oil run out soon? Will the ice caps have melted by 2050? Will we face food shortages and high food prices? How will the migrant crisis unfold? Think long term.

Be a student of history

Rogers references history a lot. He’ll refer to the Rothschilds re Waterloo, the fall of the British Empire, the fall and now rise of China, the history of Singapore. Knowing your history gives you true perspective and the ability to not panic in short-term meltdowns. History has seen it all before.

Rogers is long Asia and short The West

By this, I mean that Rogers thinks Asia will be the dominant power in the coming decades and that the US and Europe will continue to decline.

The poor education systems of the West relative to Singapore.

In a nutshell, the West has become less competitive whilst the Asia countries have become more competitive and more vigorous.

Put your money where your mouth is (or walk the walk)

Rogers was so convinced about the coming dominance of Mandarin as the world’s lingua franca that he moved his whole family to Singapore so that his daughters could learn Mandarin and be competitive.

Do your research from the ground up

Rogers advocates getting into the country you’re looking to invest in. Don’t listen to the analysts who’ve never been there. Rogers was there in Angola investing in the stock market. He was touring through Myanmar even before free travel was allowed. Do your own research and get your information firsthand.

What is your actual exposure?

This was the question that stayed with me after reading Street Smarts. Since Brexit, I’ve been acutely aware of my currency exposure. Everything I earn and own is in GBP. GBP has fallen 20% since Brexit last June. So you could have great returns in your GBP portfolio but still be down vs the rest of the world.

How do you hedge against your overexposure to your domestic currency? Rogers opens bank accounts (such as in Switzerland in 1970 which netted him a 400% return decades later). Opening up foreign bank accounts isn’t straightforward though. He suggests getting exposure via a currency ETF/ETC but I would rather have the long term exposure of money in a bank account. I’ll continue to dig and post what answers I find here in an update.