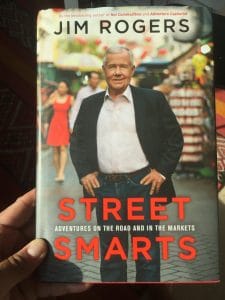 Jim Rogers is an investing legend. His Quantum Fund was up 4,200% when he retired at the age of 37. Since then, he’s taught at Columbia and travelled around the world twice setting Guinness World Records in the process! Street Smarts is a book that opens your mind. It’s an exhilarating read. The opening chapters are a memoir, which takes you from his beginnings in Alabama to Yale to Oxford to the US Army to Wall Street and to Quantum. He’s definitely a man to listen to (unlike the likes of Greenspan, Geithner, Paulson at al. who Rogers excoriates). Key takeaways from Street Smarts Think really long term Rogers thinks about not just the last bear market (2008) but about the dot.com crisis, the Asia crisis, the savings and loans crisis, OPEC, The Second World War, The Great Depression, the 1907 crash and so on. Don’t think about this news cycle; …[Read More]