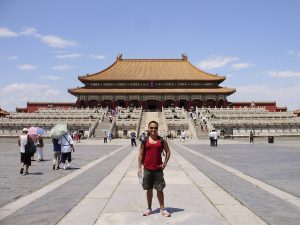 AFTER THE MANY DELIGHTS of Hanoi, I took a bus three hours’ northwards to Dong Dang at the Vietnamese border with China. Here, I walked the short limbo of no-man’s land into the People’s Republic of China; my first visit to the country. China is absolutely enormous! It’s the third biggest country by land mass in the world. It borders a staggering 14 countries: Vietnam, Laos, Burma, India, Bhutan, Nepal, Pakistan, Afghanistan, Tajikistan, Kyrgyzstan, Kazakhstan, Russia, Mongolia and North Korea. It’s the most populous country in the world with more than 1.3 billion people; to put that into some perspective, that’s more than 20% of the world or more than one in five of all people on the planet. The PRC officially recognizes 56 distinct ethnic groups, the largest of which are the Han Chinese, who make up about 92% of the total population. Large ethnic minorities include the Zhuang …[Read More] 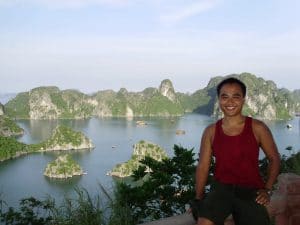 I couldn’t leave Hanoi and Vietnam without taking a quick trip to Halong Bay eastwards on the coast at the Gulf of Tonkin; eventually, after days of gentle cajoling, Lee finally managed to sell me a tour there. Halong Bay is a truly beautiful spot and a designated UNESCO World Heritage Site: gorgeous blue waters heavily punctuated with forested limestone karsts rising out of the sea. There are more than 2,000 of these little islands and the sight is something out of a James Bond movie. I joined an overnight tour on an imitation junk boat which chuntered gently around the islands. We stopped off at a vast limestone cave system on one of the islands; I’d seen quite a few of these caves on my trip but they’re still awe-inspiring. We stopped off for the afternoon at a makeshift jetty from where we jumped into kayaks and …[Read More] 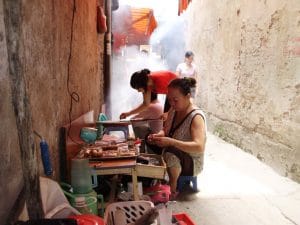 I said goodbye to Jon in Saigon; he was going to take the ‘hop-on, hop-off’ bus up the coast with a fairly flexible timeframe of arriving in Hanoi in a few weeks. I was in a bit of rush to get back to Hong Kong so I took an internal flight to Hanoi in the north of Vietnam; a place that has strong family associations, being the place where my dad and four of his six brothers and sisters were born during the Second World War, as his family were unable to return to Hong Kong, which at the time was under Japanese occupation. I flew into Hanoi Airport and headed straight for the famed Old Quarter. The first hostel I checked into was a complete fleapit so I moved myself into the infinitely better Liberty Hostel run by two lovely women, Rose and Lee, who were fantastic people to …[Read More]

“And my experience was this – and I try to describe it as accurately as I can. I had a curious sense of being literally in love with the world. There is no other way in which I can express what I then felt. I felt as if I could hardly contain myself for the love which was bursting within me. It seemed to me as if the world itself were nothing but love. We have all felt on some occasion an ardent glow of patriotism. This was patriotism extended to the whole Universe. The country for which I was feeling this overwhelming intensity of love was the entire Universe. At the back and foundation of things I was certain was love – and not merely placid benevolence, but active, fervent, devoted love and nothing less. The whole world seemed in a blaze of love, and men’s hearts were burning …[Read More]

After the Temples of Angkor, I took an eight hour bus ride south-east to Phnom Penh, the capital of Cambodia, on which I met Jon Regan, a top bloke from Essex. He‟d been travelling for 18 months and planned a further 18 months, finishing off with a ski-season in Canada during the Winter Olympics. He‟d unfortunately been burgled in Siem Reap. Apparently, his dormitory had been completely cleaned out by a thief in the middle of the night. People apparently noticed a quiet guy who came into the room after the lights had gone off; he‟d just sat down in a corner. At around 3am, someone screamed, the lights came on and everyone had lost some valuables, with the guy nowhere to be seen. Unfortunately for Jon, he‟d lost a laptop. Phnom Penh is definitely more off the beaten track than, say, Bangkok. I had been really looking forward to …[Read More]