I said goodbye to Jon in Saigon; he was going to take the ‘hop-on, hop-off’ bus up the coast with a fairly flexible timeframe of arriving in Hanoi in a few weeks. I was in a bit of rush to get back to Hong Kong so I took an internal flight to Hanoi in the north of Vietnam; a place that has strong family associations, being the place where my dad and four of his six brothers and sisters were born during the Second World War, as his family were unable to return to Hong Kong, which at the time was under Japanese occupation. 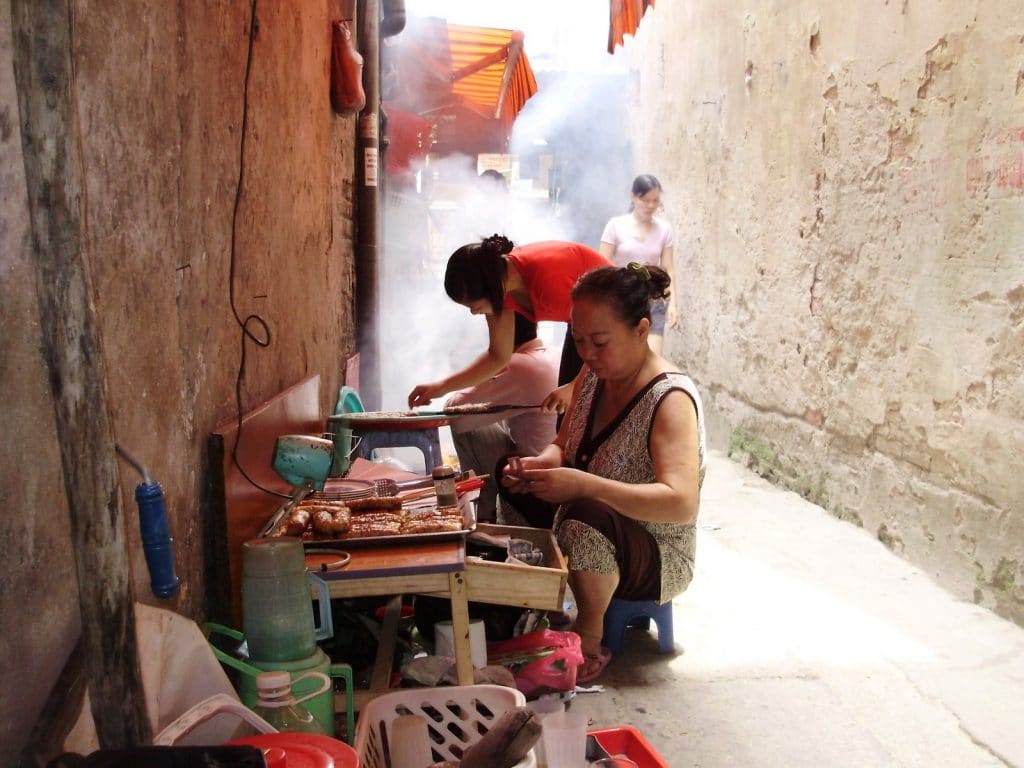 I flew into Hanoi Airport and headed straight for the famed Old Quarter. The first hostel I checked into was a complete fleapit so I moved myself into the infinitely better Liberty Hostel run by two lovely women, Rose and Lee, who were fantastic people to know during my stay in Hanoi. Rose, took me under her wing and would recommend things to try and places to visit. She’d take me to local hangouts such as random alleyways where a makeshift restaurant had set up an impromptu business serving classic Vietnamese dishes such as cold white noodles with a sweet soupy dressing or to ramshackle, charming tea-stalls on the pavement with large blocks of ice and tiny, plastic stools or miniscule drinks bars tucked behind another shop where she’d tell me about Vietnamese culture, history and what she loved about her city. 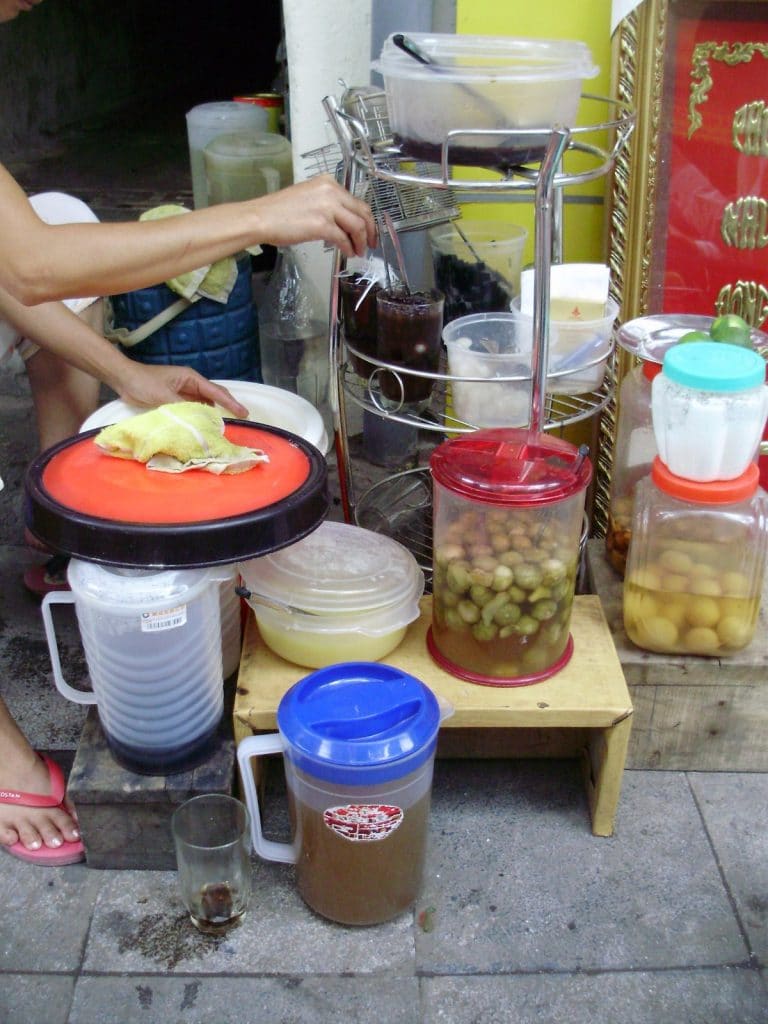 She and her small son, Minh, took me to the Hoa Lo Prison (also known more ironically as the Hanoi Hilton) where American prisoners of war (including Senator John McCain) were held. They also took me for an exhilarating and memorable scooter ride around Hanoi, around the huge lake, through tiny side streets and through the teeming throngs, bumping into fellow scooter riders and dodging pedestrians. 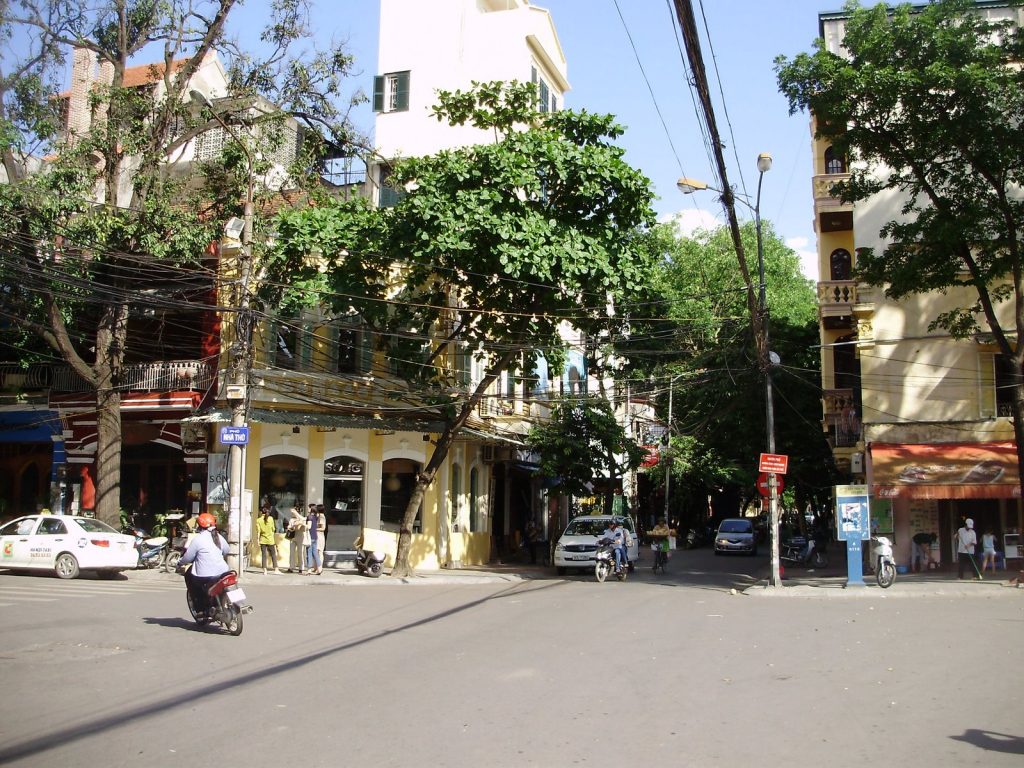 Just walking around Hanoi is incredible. The Old Quarter is an impossibly charming, disarming and elegant place; it’s a maze of gorgeous tree-lined streets of pretty low-rise houses, shops, cafes, restaurants, art galleries and temples all operating at a perceptibly slower pace of life than Saigon; a pace of life which, whilst still frenetic, seems focused less upon rampant commercialism and more upon the good life, with an awesome street culture where everything seems to happen on the pavement, such as outside a house, hostel, café etc, and whilst on the pavement, drinking great coffee, eating superb food, playing Chinese chess, smoking, peeling vegetables, posing on your motorbike, socialising with your neighbours, having a welcome ice-cold beer etc.; just watching Hanoi life go by. It’s just all so elegant! This elegance is perhaps best epitomised by the Hanoi womenfolk, who wear beautifully crafted silk pyjamas at any time of the day in vibrant colours and ornate embroidery just going about their daily lives, on foot or on scooters. 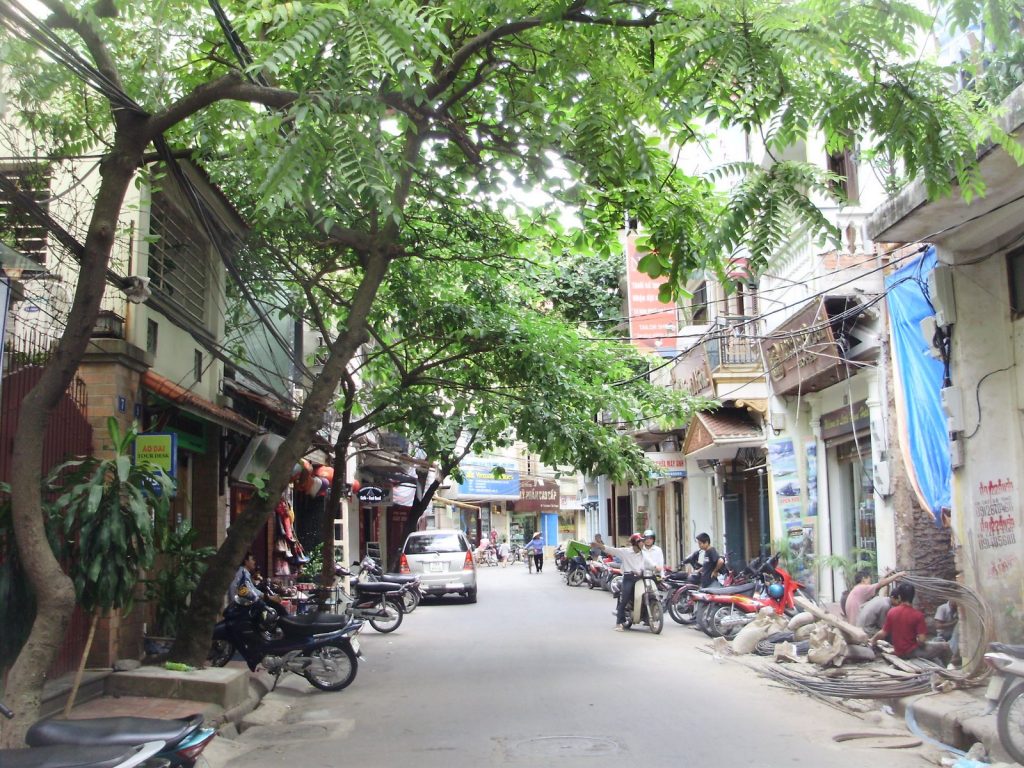 In Hanoi, it’s easy to spend hours and hours just strolling the streets, absorbing the bustle, admiring the famous silk shops, checking out the huge local art scene with countless galleries (the art scene is huge in Hanoi and visitors are warmly welcomed by galleries who heavily promote local artists. Much of the art is aimed at tourists, with plenty of images of traditional Vietnamese headwear on lacquered wood, but there is a wealth of younger artists dominating Hanoi galleries with exciting fusions of traditional subject matter with techniques and influences from around the world. I was particularly struck by the impressionistic art of Lee Minh Duc), friendly haggling with vendors, stopping at tiny street stalls for some of the finest coffee I’ve ever tasted (as with the coffee I enjoyed in Siem Reap, Vietnamese coffee is drip-fed from a filtered container and produces some of the strongest, thickest and ‘nuttily’ delicious caffeinated rocket fuel I’ve ever tasted. Many in Vietnam take this with condensed milk but I prefer it without – a great kickstart to the morning!), pulling up a tiny stool outside a bia hoi (beer house) and gulping down delicious local draught, poking your head into a beautifully preserved local temple, eating fantastically aromatic and mouth-watering food in the street stalls or local ‘hole-in-the-wall’ joints and so on and so on! 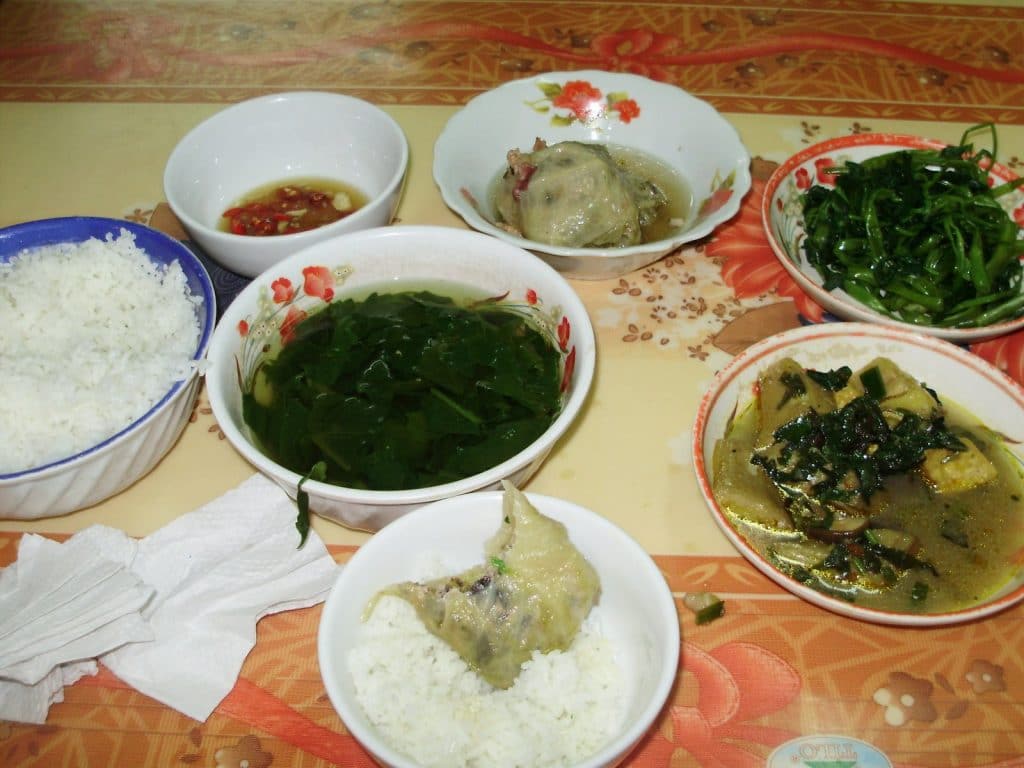 The food in Vietnam is immense! It’s my favourite of the many foods that I’ve encountered so far on my travels; it’s so delicate and fragrant and yet still packs in huge amounts of flavour. Its key ingredients are garlic, sugar, fish sauce, chillies, lemon grass, coriander and mint. Pho is the national dish; it’s a delicious rice noodle and beef soup. The noodles are made from rice flour and water. The broth is a complex, time-consuming (to brew) nourishing elixir made from various bones, vegetables and herbs. The beef is thinly sliced and raw; it’s partially cooked by the heat of the stock poured over it immediately before serving. It’s lavishly served with garnishes like bean-sprouts, basil leaves, limes, and of course chillies. 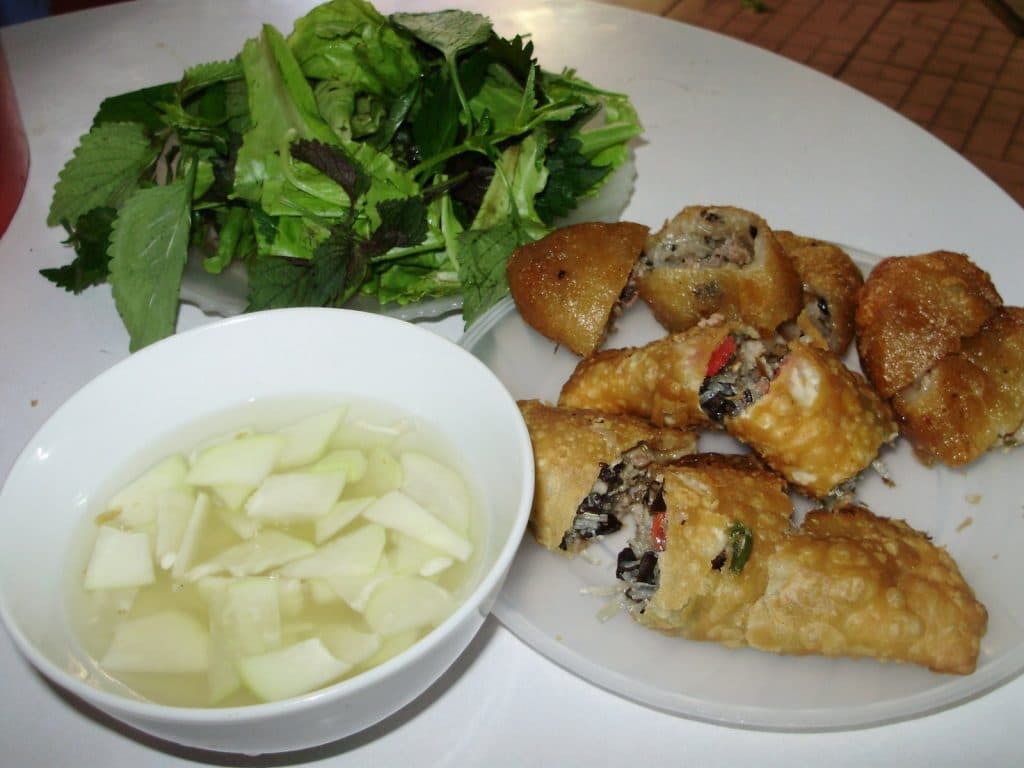 My favourite eating place was just off the lake; it was a tiny, nondescript restaurant with small plastic tables and tiny, kid-sized stools with a large food counter. You just point at what you want and sit down. Everything would be served with complimentary rice and a thin vegetable soup for contrast. My favourite dishes there were these fantastic steamed parcels of pork and ginger wrapped in Chinese cabbage leaves and delicious tomato-based fish stews; absolutely superb and best served liberally doused in traditional Vietnamese condiments such as mountains of chilli oil, crushed garlic and fish sauce. From here, I’d stroll to the next street to sit on the pavement outside a stall and enjoy crushed ice, chopped fruit and condensed milk in a tall glass for dessert. Then, as the sun would begin to set, I’d head off to a bia hoi to drain a couple of beers. Afterwards, I’d walk it all off with an explore around the many night markets all over town.

Clothes had become my preferred souvenir the further I travelled and t-shirts had become my favourite. God, I’d become a walking cliché! So I also went in for scarves and Vietnamese slippers. I’d had my eye on a bespoke suit since I went into a tailor’s shop in Saigon. Hoi An, between Hanoi and Saigon, is probably the most famous place in Vietnam for suit-making, but there are concerns amongst consumers about quality. In the end, I went to Duc Nhuan in the Old Quarter on Hang Manh Street where a ridiculously young tailor fitted me for a suit. She fashioned two cashmere suits to my specification (slim fit, double vents, and working cuff buttons) for an absolute fraction of the price a bespoke suit would have cost in England. This huge cost differential can’t just be about the relative cheapness of things in Vietnam and the wider South-East Asia. It just reinforces my thinking that things are just too expensive in the West. When the quality of production can be as good as this for this little money, it’s easy to see why so many companies outsource all manner of business to the developing world.

Before I left Hanoi, I visited the immense Ho Chi Minh Mausoleum where the preserved body of the revered and beloved father of Vietnam, Ho Chi Minh, rests in perpetuity. It’s a slightly macabre sight, filing past in single file the slightly garishly lit mummy. 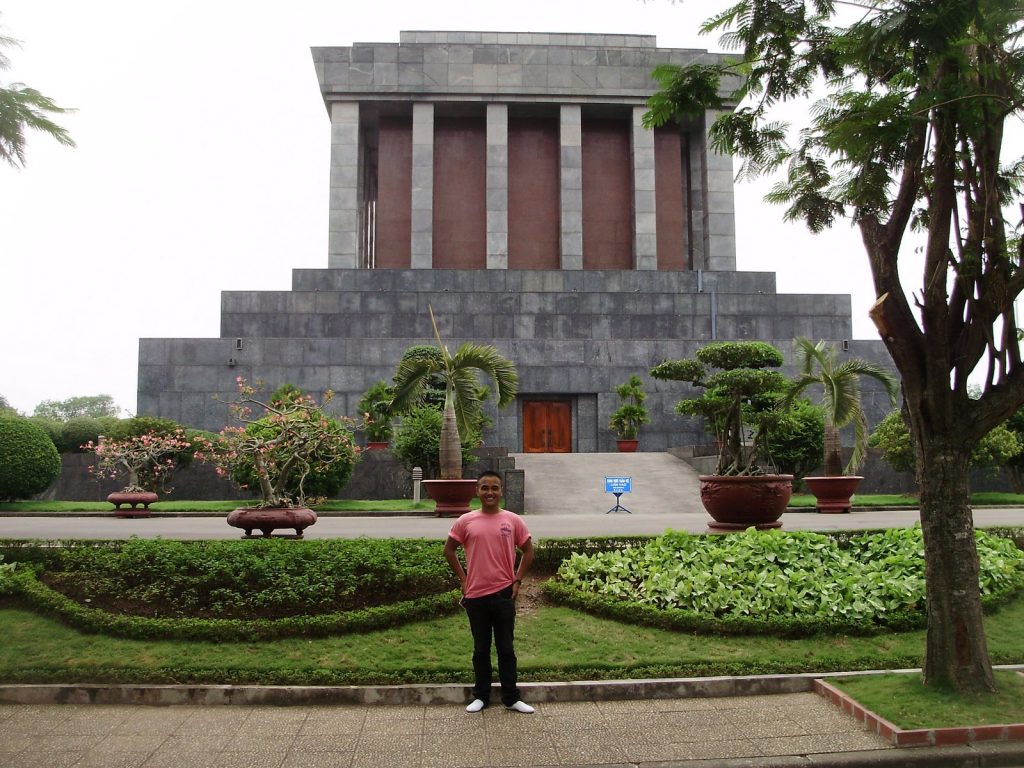 After about thirty seconds, you’re whisked away to the exit. Afterwards, whilst on a moped, I saw a huge statue of Lenin, the main architect of the Russian Revolution, erected on a random and unheralded square. Of course, I had to take a picture with the old Commie! 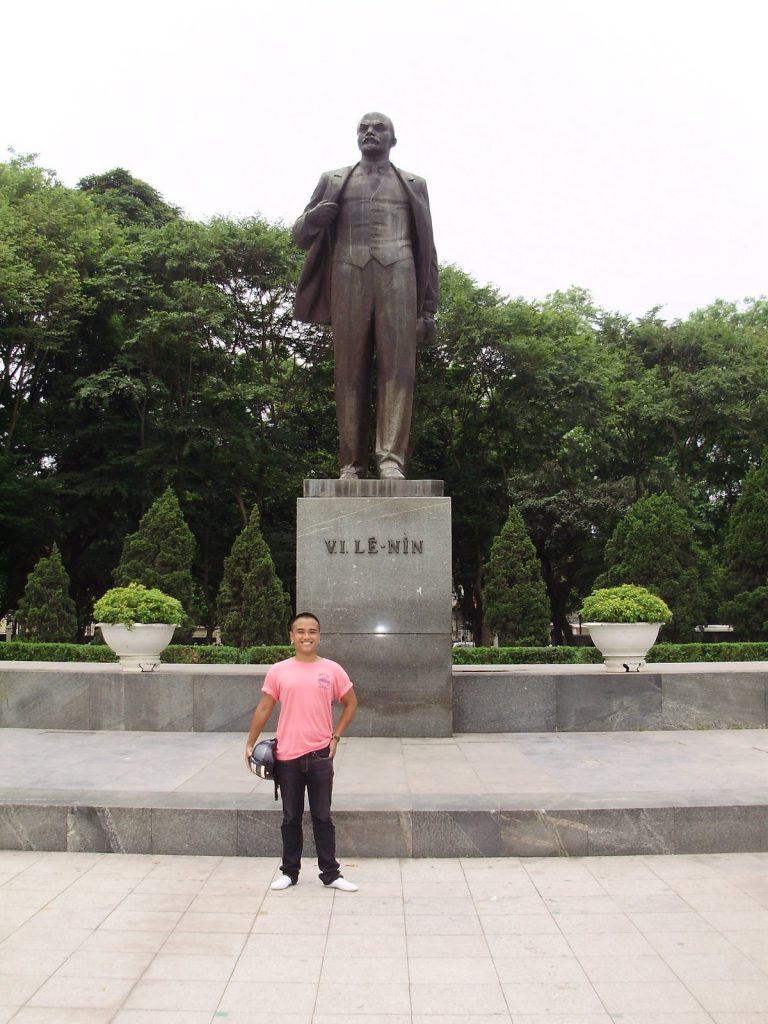 It’s a lesser-known fact that Vietnam is one of the few remaining Communist nations in the world today. It’s a single-party state which, whilst not in-your-face, has enough vestiges of socialist iconography and imagery that pervades everyday living. You also can’t miss the red flags and socialist starred t-shirts; all for tourists; I was unable to resist.