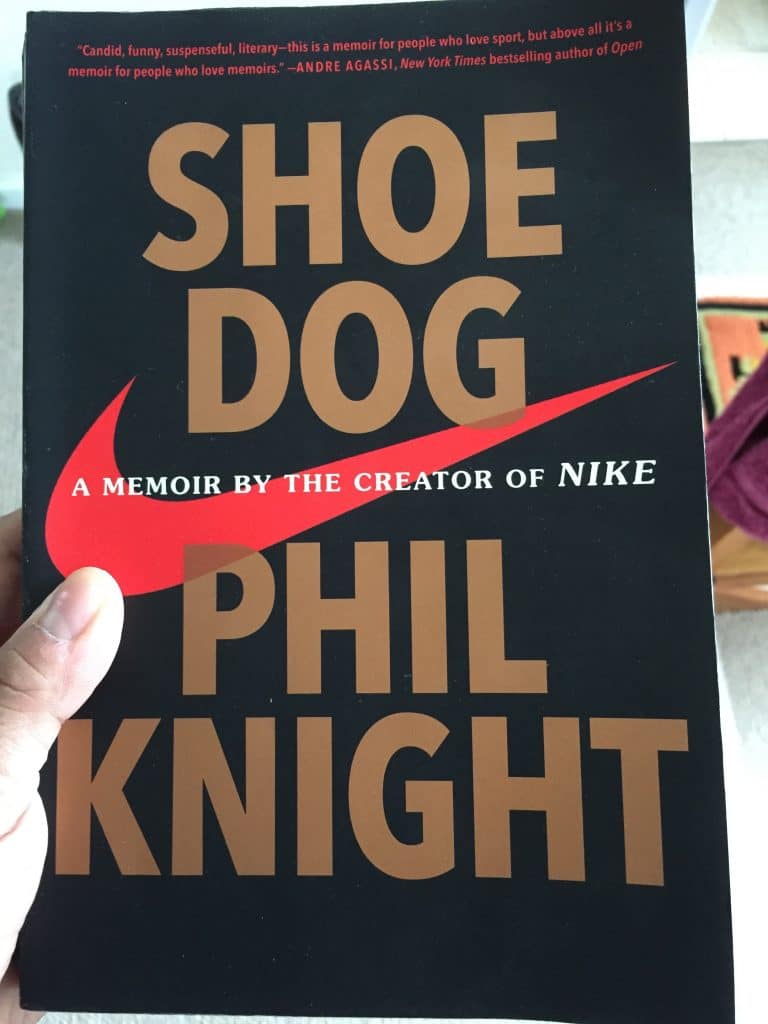 I picked up Shoe Dog on a recent trip through Hong Kong airport. I’d first heard about it on Bill Gates’ excellent blog.

I read this in less than a week. It’s that good a page-turner.

It’s the story of how Phil Knight went from selling shoes in Oregon to building a $30bn empire.

What stands out about this book is its raw honesty. Knight never puts a nice spin on things.

In many ways, he’s a very difficult man. He doesn’t omit this. He’s uncommunicative to colleagues and can be a complete asshole. But he’s a man you respect and by the end of the book, I really liked him.

It reads more like a novel than a business book. One of the best memoirs I’ve ever read.

Pursue something related to what you love

Knight wanted to be a professional athlete. He fell in love with Japanese running shoes and wanted to sell these instead. His obsession with bringing these shoes to a wider market was what allowed him to work long hours and never give up, even when faced with disaster.

Knight is a master at building relationships with quality partners. It isn’t just his team (detailed below) but also Japanese holding company called Nissho, who gave Knight the funding and knowledge that he needed, and actually saved his company from bankruptcy once.

Build a seriously great team around you

He built a team of obsessives in the early days. People like Jeff Johnson who loved running and the Onitsukas that Knight was selling in the US. People who would give up everything for the company (like move from the West Coast to the East Coast just because they were asked. Above all, he recruited people with extreme loyalty, to Knight himself and to the Blue Ribbon company (the first incarnation of Nike).

He also took out chunky loans and left a solid job at Price Waterhouse (as it was then) to focus 100% on his company.

Be a voracious reader

In the early pages, I was pleasantly surprised to see that Knight was a deep reader. More importantly, he was a reader of quality. He recounts how he went to Johnson’s house once and saw a fellow reader, one that read philosophy and ancient history. Knight regularly quotes what he’s reading at the time. At one point, he has a fascination with generals and biographies of his three main heroes: Churchill, Tolstoy and Kennedy. He quotes widely: Confucius, Alexander the Great, Rumi, The Upanishads, Dante, Voltaire, Rousseau, The Oresteia and much, much more.

For a similar read, check out “Legacy – What the All Blacks can teach us about the business of life” by James Kerr and my summary here.