When I was at uni, I took an Aesthetics class. The Philosophy of Art. I don’t remember much from that course except for a couple of essays on Plato and Tolstoy. Plato was keen that when educating the young men of his Republic that their art be censored and that the youth should only consume art that promoted nobility. So poetry shouldn’t be about loucheness and hedonism, rather they should be about promoting bravery in battle and moral uprightness. I was reminded of this recently after binge-watching a series of Mindhunter on Netflix, a show about the FBI’s profiling of serial killers in the 1970s. This is show that goes deep into the minds and motivations of deeply disturbed people, and it’s very entertaining and very compelling. We watched this off the back of Unabomber, another Netflix show, this time about the hunt for another serial killer, Ted Kaczynski. Again very entertaining and …[Read More]

I’m a creature of habit. At home, we eat the same food all the time: a bit of protein always like steak, salmon, fish cakes, some carbs (generally pasta), and some veg (we’re very partial to broccolini as it cooks so quickly). In lockdown, however, I crave foods I’d never normally cook as I can get them in restaurants or by a takeaway. Deliveroo doesn’t have that many options as many restaurants have shut completely. I wanted duck pancakes, so I bought ingredients that were closest to them. We had some hoisin sauce already (but no yellow bean sauce, which is the main flavour in duck pancakes). I bought some duck legs ready to be roasted from Sainsbury’s, and some Mission small tortillas (for the ‘pancakes’), some cucumber and spring onions to be finely sliced. I also craved a proper burger, and bought some beef burgers, lettuce, white onions and …[Read More] 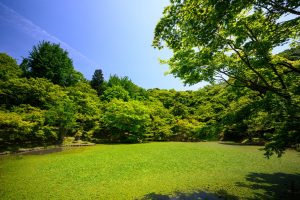 On one hand, the lockdown has meant enforced self-isolation, grandparents not being able to see their grandkids, people being cooped up in often tiny flats, and a generation of homeschooled kids. On the other hand though, we’ll never see these extraordinary times again. Less movement means less pollution. There’s reports of dolphins swimming in the canals of Venice, stars being visible again. We’re spending a lot more time with our immediate families and wistfully pining after simple pleasures that we took for granted, such as going for walks when we wanted, going to the pub for a pint, going to the cinema to watch a movie, going to the shops to buy food whenever we wanted. What’s really important? Going out and enjoying nature. We’ve got great parks on our doorstep but we never go. We’ve got Richmond Park, Bushey Park, Hampton Court, Box Hill, Epsom Common, Wimbledon Common, and in …[Read More]

I started working from home on 17th March, and I started showing symptoms of Covid-19 on 19th March. I’d been out shopping that morning. Sainsbury’s was busier than I’d ever seen, with queues for the checkout going to the middle and the back of the store. I decided to go to Waitrose instead, which was only marginally less busy. I thought I had hayfever so I went to Boots to stock up on medication, and I went to Poundland to stock up on household essentials like washing liquid and bleach. At this stage, there was talk of a lockdown for London, but nothing firm. There was a rumour in the FT that the lockdown might involve the army, and start on 20th March, but this was squashed by ministers. That afternoon of the 19th, I started to feel achey, and by the evening, I began to feel cold and shivery. …[Read More]

Hey there! This week I’ve been reading a corking article about US Air Force Pararescuemen (also known as PJs) who are the guys that Navy Seals call when they’re wounded and need help behind enemy lines. PJs are elite combat medics who can provide expert medical help and rescue in the most hostile environments. The article is: The Savior Elite: Inside the Special Operations Force Tasked with Rescuing Navy SEALS They are the military’s “guardian angels.” They are trained paramedics, paratroopers, and combat divers. This is the story of one such airman, and the mission of a lifetime. It tells the story of a civilian vessel hundreds of miles from the nearest port and hospital which had had an explosion that left several sailors with horrific burns and life-threatening injuries. The surgery that needed to be done in tight, fearsomely hot confines is compelling and just another of Esquires’s excellent long-form reads. From …[Read More]