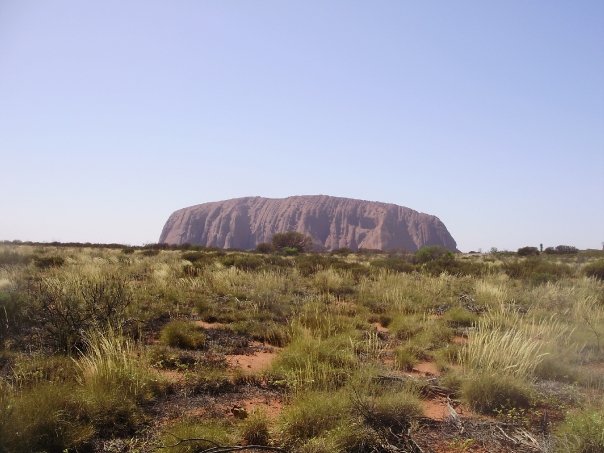 During our stay in Alice Springs, we took a 3 day tour to see Uluru (Ayers Rock), Kata Tjuta (The Olgas) and Watarrka (King’s Canyon). Without doubt, it was one of the best trips I did on my travels. We met some interesting and diverse people including: Shin and Nagate from Japan, Filippo Sbaldi and his mum, Angela Sorbello, from Italy (who were both on a huge tour around Australia), Sarah Igel and Carolien Lehnen from Germany (travellers who were coming to the end of several months in Australia), Manuel from Switzerland (a student on his travels), and Romaine Cerou from France (a soldier on extended leave from his normal Army life). Our group was led by Caitlin, from Adelaide, who was a passionate and energetic tour guide (she was about to embark on an architecture degree course in Sydney).

We opened up with a quick visit to a camel farm outside Alice Springs. Camels are big smelly animals; these were one-hump beasts. We took a quick ride on one of them; these things can really trot! They sit down by bending their front legs, almost kneeling, then sit on their hind legs, you board and then they simply stand up to at least 3m tall! We then drove six hours into the Outback, with its iconic red dust. The dust got everywhere: in your eyes, in your socks and eventually in your mouth. That afternoon as the sun began to drop, we went to Kata Tjuta (“Many Heads” in the local Aborigine language), a massive group of huge rock formations just 25km to the west of Uluru. We walked through the Valley of the Winds, a gorge between two of the great rocks. The highest point is Kata Tjuta (or Mount Olga) which at 546m tall is 198m taller than Uluru. We set up camp back near Uluru and walked to the viewing point to catch Uluru and Kata Tjutas at sunset, when the colour of the formations shift from brown to classic, picture postcard red. It was fairly busy with other tourists but a sight like this was never going to be enjoyed in peace. Even with the crowds, Uluru and Kata Tjutas provide a powerful sense of the Sublime. They‟re awe-inspiring and genuinely baffling. Why are these huge rock formations here where they stand in unimaginable vastness? Why are there no other rock formations around them anywhere in sight? In three days, I didn’t hear one theory that I found convincing or that I understood. There was even contention surrounding the theories as to why the dust is red. In the end, I suspended reason and just let myself enjoy the spectacle. Even then, the sheer magnitude of the Rock and the Olgas and the vast skies and desert made it impossible to fully take in. For supper that evening, we cooked a huge stir-fry on an industrial sized griddle and that night we sat around the camp and drank that backpacker‟s staple, boxed white wine, singing each others‟ national anthems. We slept in classic Aussie Outback fashion, in swags (a type of sleeping bag made of canvas and with a thin mattress) just under the stars, well-fed and well-oiled. 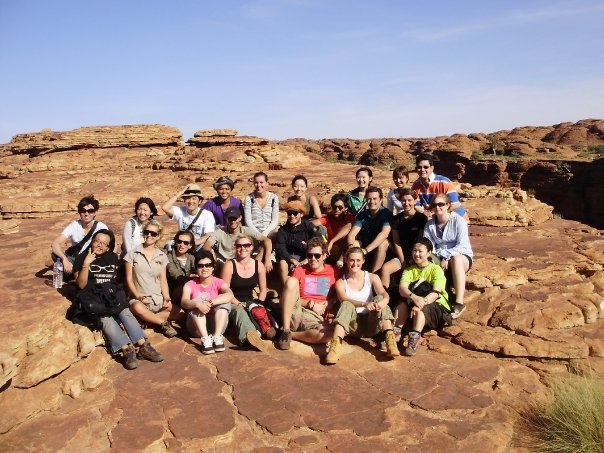 The next morning, whilst still slightly dark, we drove to Uluru for a walk around. The option still exists to climb the Rock, however, this was strongly discouraged by the Aborigines as being a desecration of a site they considered one of the most holy sites in Australia. Successive Australian Governments have defended the right of visitors to climb Uluru and Aboriginal elders plead with would-be climbers to choose not to climb. I can‟t think of a reason why the Australian government would want to maintain the right to climb a sacred site, in defiance of the Aboriginal community‟s requests, to whom the site is holy. However, the decision was taken out of our hands that day; conditions were deemed too windy to be safe. 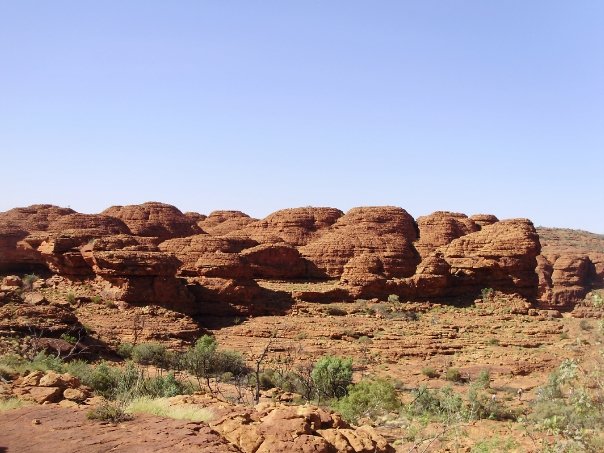 I can‟t describe just what it‟s like being in places that you only know through pictures, and through television and in books. Like Machu Picchu and Rio de Janeiro etc., being at Uluru, viewing it in the flesh from a distance, and being close enough to actually touch it, is incredible. It‟s the difference between vicarious experience and being there, an intangible yet perceptible qualitative difference. It‟s massive up close; around 348m tall and nearly 10km to walk around it. It has gorges carved into its sides from millennia of water running down. Incredibly, like an iceberg, most of the formation is below ground. It‟s brown most of the day but appears to turn red at sunset. 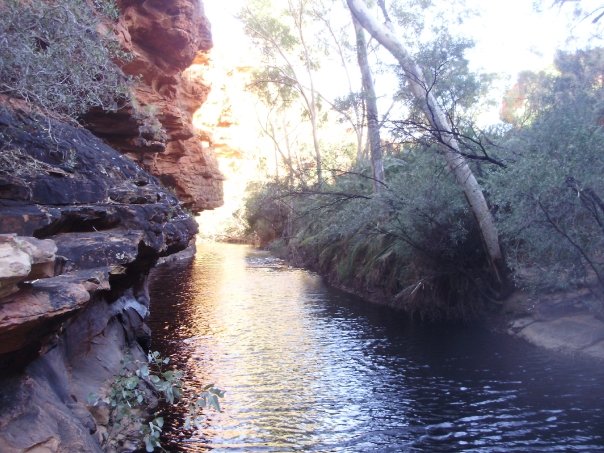 That evening, Angela rustled up as authentic an Italian meal as could be with the limited ingredients we had. IPods were plugged into the bus and we had a drunken party in the bush; everyone chatting, dancing, and mucking in; exactly what camping should be all about. We were warned about dingoes before going to sleep, so we all laid our swags in tighter formation this time before going to sleep. 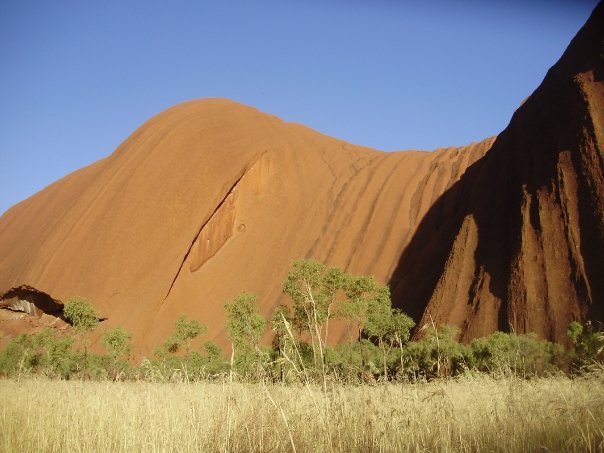 The next day, we woke up early again to take a dawn walk through the King‟s Canyon, an incredible gorge cut into a mountain range – absolutely spectacular! I saw an intriguing native tree, the ghost gum, which, when water is scarce, cuts off the water supply to its weakest branches, with the ability to resurrect them when supplies eventually return. Here, I saw the landscapes of red sandstone domes (resembling huge beehives) that inspired Sir Sidney Nolan, whose paintings of the King‟s Canyon I‟d been so struck by in the Art Gallery of New South Wales in Sydney. That afternoon, we drove the six hours back to Alice Springs where the tradition of all Uluru tours is to end up in Bojangles and get completely hammered. We couldn‟t break with tradition, could we?! Bojangles is a great bar; with a Wild West saloon feel with coffins on walls full of peanuts, boisterous and friendly Outback locals and macabre crocodile skins as trophies on the corrugated-iron ceilings.