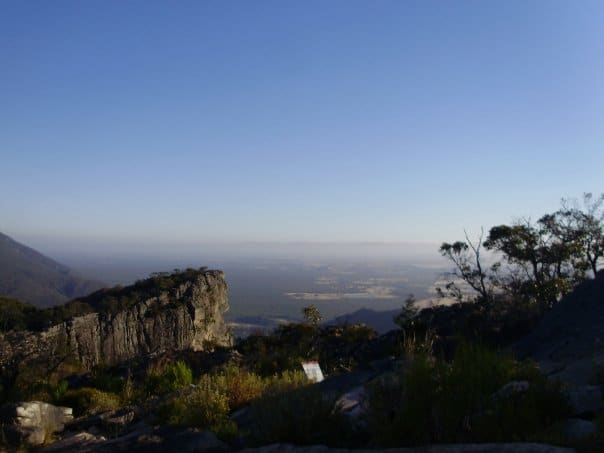 To get to the next destination of my Australian journey, Melbourne, I took a trip through the intervening country, namely the Grampians National Park and the Great Ocean Road, a journey of more than 700km in total. Before the bus pulled out of Adelaide, at the last pick-up point, on stepped two people from my Uluru tour, Filippo and Angela; it was fantastic to see them again. Perhaps the odds weren’t quite as long as bumping into Rhodine, Michel or Leonie back in Buenos Aires, but still the coincidence was quite unlikely; last time I saw them, two weeks previously in Alice Springs, they were heading westwards the vast distance to Perth; here in Adelaide, they’d picked the same tour company as I did, were leaving on the same day as I was, were going in the same direction etc.; what are the odds! 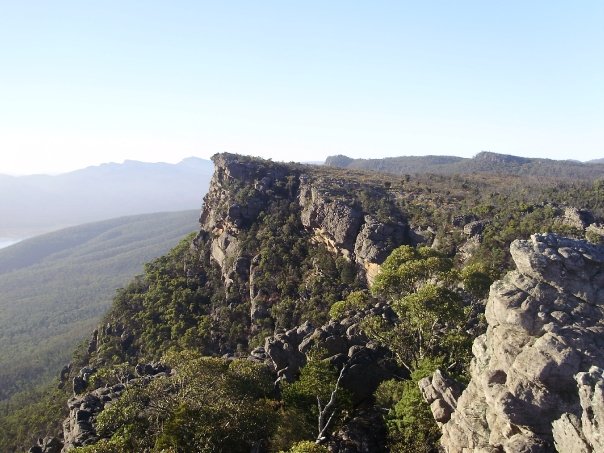 As usual, there was a lot of driving; we went through the Grampians and spent the night at a quiet village called Hall’s Gap (so quiet in fact, it could have been the setting for a horror movie about killing off backpackers one by one), where I saw kangaroos in the wild. I was able to get to within about 10 metres of these amazing animals before they bounced away. That night, we played the classic travellers’ card game, Shithead. A classic “Get rid of your cards‟ card game. The cards are divided up between the participants who lay their 3 “best‟ cards on top of three “blind‟ cards. According to pre-determined rules (they vary), the remaining cards in your hand have to be discarded before the cards on the table can be played. There is no “winner‟ as such, just don’t be the last to get rid of all of your cards, or you are the “Shithead‟! 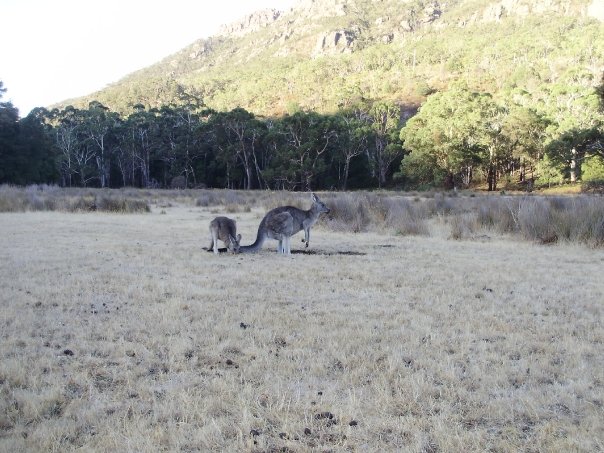 The next day we touched the coast again and I saw many of the stunning rock formations that liberally pepper the coastline between Adelaide and the Great Ocean Road. These formations will be particularly familiar to school-level geographers as “stacks‟, which are parts of the coastline where sections of rock have eroded and collapsed into the sea leaving behind parts of the coastline seemingly stranded on their own in the ocean and separated forever from the mainland. The most famous of these are a group of rock formations known as The 12 Apostles, which, along with the Great Barrier Reef and Uluru, are some of the most iconic symbols of Australia. 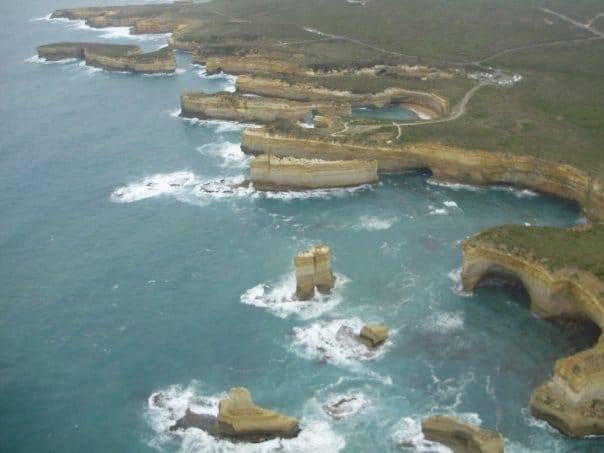 Our tour was fortunate enough to be given a generous discount on helicopter flights over the 12 Apostles and this was ten minutes that I‟ll never forget. It was a Huey-style helicopter and Mary, Angela and I went up together. We were given a set of headphones each and we just smiled, pointed and waved like idiots for the entire ride. We flew over the coastline and over the 12 Apostles (which aren‟t really twelve strong, but then I suppose the 7 Apostles wouldn‟t quite have the same ring). I was grinning involuntarily like a loon for a couple of hours after! It was phenomenal! 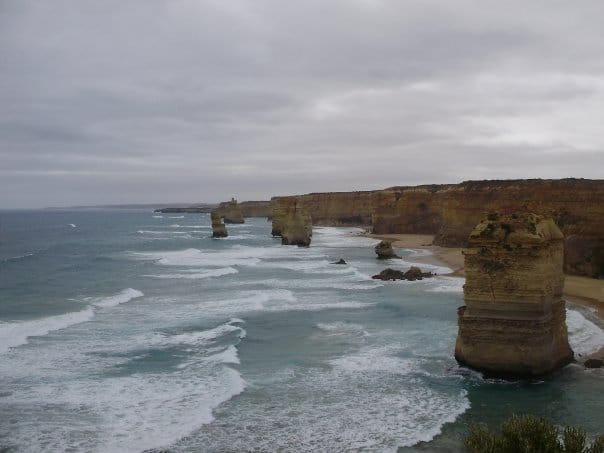 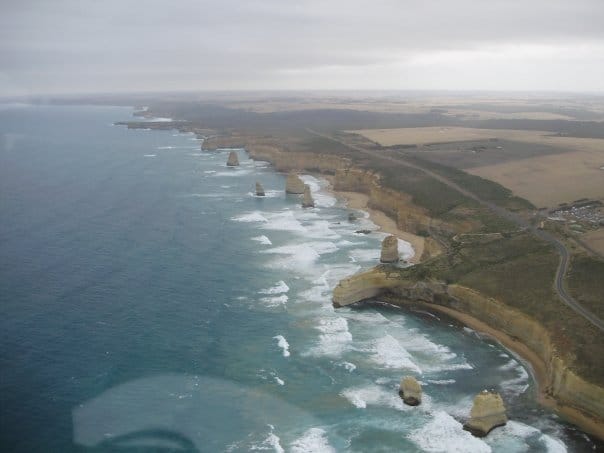 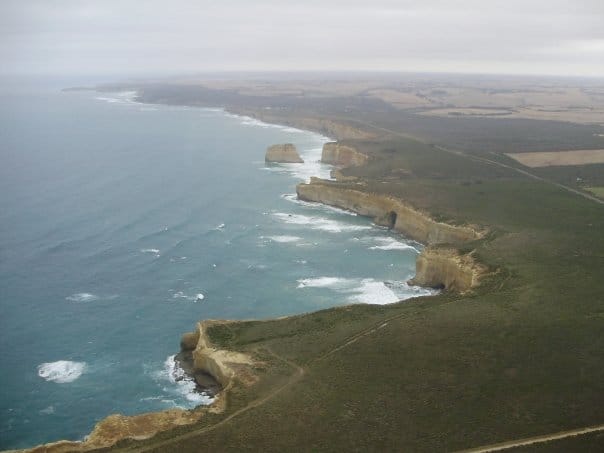 Another formation we saw was London Arch, which used to be a double arched rock formation connected to the mainland, looking just like a bridge, going someway to explaining its previous name, London Bridge. However, a few years ago the arch next to the coastline collapsed, but one remained ‘stranded’. Unfortunately, at the time, a couple happened to be in flagrante on the bridge. Don‟t worry, they weren‟t on the part that collapsed, but they were on the part still standing, meaning that they were alive (woohoo!) but stranded (aaah!). Not for too long because luckily for them, the then Australian Prime Minister happened to be giving a press conference nearby, when a keen journalist rushed into the conference room shouting to everyone that London Bridge, an Australian icon, had just fallen down. The whole room, journalists and cameramen, piled out and rushed to the scene, just in time to see the red-faced couple being winched off the rock by helicopter and whisked away to safety, all in time to be broadcast on the national six o‟clock news as the leading story!

That evening, we stayed in the pretty, hippy town of Port Campbell, where with full bellies of chilli con carne, we sat outside on the wooden veranda of our charming, coastal hostel, wrapped up against the cool night sea air in our duvets and drank the delights of boxed wine again. The next day we left Port Campbell at 7am to see the Loch Ard Gorge, another magnificent rock formation on the coast within the Port Campbell National Park, close to the 12 Apostles. The spectacular Lock Ard Gorge is an inlet carved into the coastline with a small sandy beach. It‟s named after the famous Loch Ard, an English cargo ship bound for Melbourne that was wrecked here on the rocks in 1878 with just two survivors out of 48 on board: Eva Carmichael, just 18 years old (who lost her whole family in the wreck) and the ship‟s apprentice, Tom Pearce, also 18. Pearce‟s heroics that night (including pulling Eva to shore and scaling the huge cliffs to seek help) were instrumental in both their survivals; he was awarded a huge 1,000 pound cheque by the Victorian Government and the first Gold Medal of the Royal Humane Society of Victoria. Unfortunately, despite the huge public interest in the pair, with the people yearning for a romantic outcome to the tragedy, Eva and Tom did not get together; after her successful recovery, Eva returned to Ireland.

After Loch Ard Gorge, we continued eastwards along the Great Ocean Road, a 243km stretch of single lane road carved as close to the coastline as it’s possible to get! It was built after the First World War primarily as a means of providing employment to returning veterans; it took 14 years to complete and it‟s absolutely spectacular. I was lucky enough to be sitting on the right-hand side of the bus for an unobstructed view of the vast, deep cobalt-blue waters of the Bass Strait and the Southern Ocean stretching as far as the eye can see. (The Bass Strait refers to the waters between the Australian mainland and Tasmania to the south. The Southern Ocean surrounds Antarctica. Interestingly, some geographers deny the Southern Ocean‟s existence; rather they think of these waters as part of the Indian Ocean or the Pacific Ocean.) On the day I saw it, the ocean wasn‟t tranquil and clear but instead choppy, breaky and utterly magnificent. The Great Ocean Road is never straight; it bends faithfully following the coastline. It‟s a monument to an extraordinary feat of endeavour and one of the finest sights that I‟ve seen on my Australian travels so far. 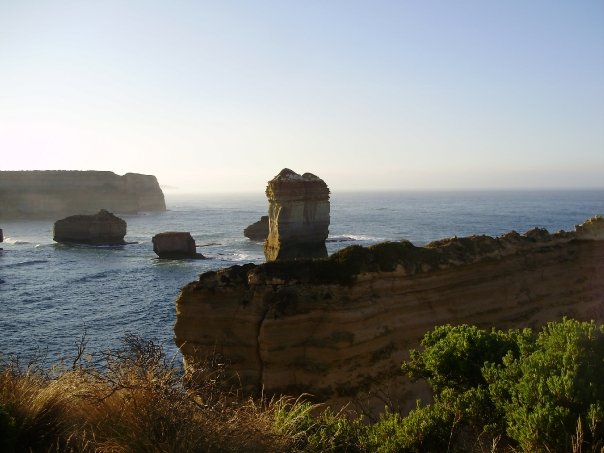 We also stopped off at a rainforest, the Great Otway National Park (what’s a rainforest doing here?!), providing further evidence of the amazing natural diversity of this country. Here, we saw that other icon of Australia; the koala. This marsupial sleeps around 18 hours a day apparently digesting the indigestible (to most other living things) eucalyptus leaf and is dangerous if roused. 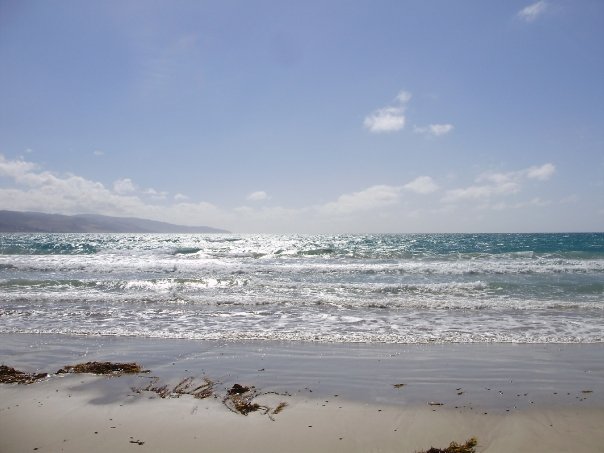 From here, we passed many stunning beaches which have the cool and salty feel of a European coastline. My favourite amongst them are the incredible Apollo Bay, Lorne in Loutitt Bay and Torquay. Also en route is Bell’s Beach, a surfer beach immortalised in the classic Kathryn Bigelow movie Point Break. Spoiler Alert for those that haven‟t seen it (Why haven’t you seen it?! Go and rent it out!) This is where Bodie goes to surf at the end of the movie in the eye of the legendary 50 year storm. 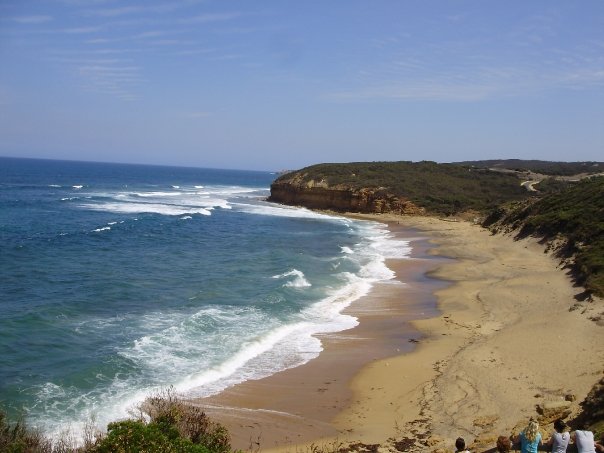 Unfortunately, our tour guide, Tom, informed me that the movie’s ending wasn’t actually filmed here at the real Bell‟s Beach but was filmed somewhere in America – what a downer! From here, we drove past Geelong, in the western outer suburbs of Melbourne and easily the biggest city I‟d seen since leaving Sydney.