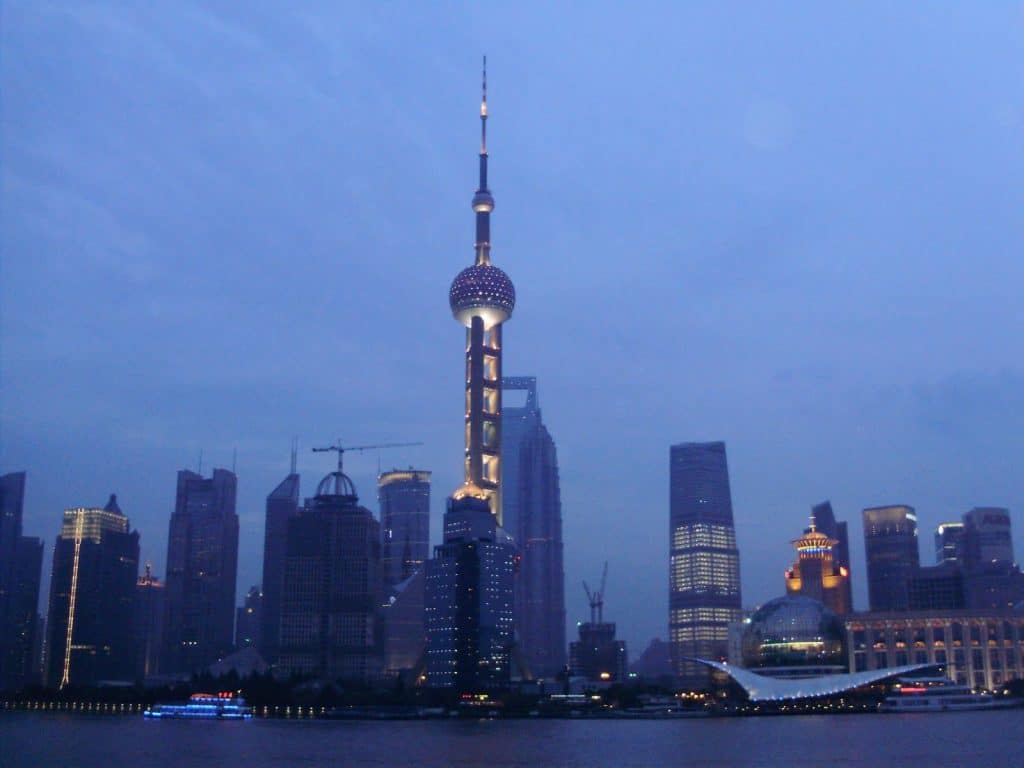 After Beijing and the Great Wall, I said goodbye to my cousin Jerry, for a few days at least, whilst he returned to Hong Kong and I travelled south-eastwards to Shanghai. I took an overnight sleeper train. Trains are a pleasurable experience in China; my train left from Beijing Central Station, where I got the impression that night travel is a popular mode of transport in China. Passengers waiting for their trains sit outside the station in small huddles, with families and friends. There are masses of street hawkers all selling exactly the same products: water, tea, tiny folding chairs for waiting on and, of course, a myriad of cups of instant noodles for the train ride. Trains in China all come equipped with free hot-water dispensers for tea and noodles – so civilised! Train travel is a dream here; comfortable full-length bed bunks (full-length for me I suppose at 5 feet 6 inches tall), helpful and attentive staff (even through the mutual incomprehension), an excellent buffet carriage replete with tasty food and, most importantly, trains depart on time and arrive on schedule.

Shanghai sits on the east coast of China on the Huangpu River Delta. The city can be usefully split into two zones: Pudong to the East and Puxi to the West. Puxi is supposedly where all the culture and history are whereas Pudong is (according to the guidebooks anyway) fairly soulless; it‟s where the new global commercial future of Shanghai is based, with its futuristic mega-buildings and impossibly bright and gaudy lights. I was only in Shanghai for a short time and I stayed exclusively in Puxi.

It‟s impossible to describe Shanghai without a brief discussion of its past. Shanghai has a complicated history chequered by a series of humiliations inflicted by the Western powers and by unimaginable atrocities committed by the Japanese during its occupation of Shanghai in the Second World War. Shanghai’s real history started after the Treaty of Nanjing in 1842, following the First Opium War with Britain and her allies. The resulting peace settlement (as we saw earlier) saw Hong Kong ceded to the British and, amongst other things, saw Shanghai become Britain‟s most important post in China, both strategically and in terms of trade. Other nations followed Britain‟s lead, with the Americans and the French establishing their own “concessions‟ (areas of land within Chinese borders whilst deemed outside of China’s control). The following decades saw Shanghai mushroom from a fishing port to a global metropolis. Evidence of the colonial powers’ occupation can be seen all over the famed Bund, a stretch of riverside real estate filled with European-influenced architecture. Further humiliation was heaped on China by the defeat by Japan in the Sino-Japanese War of 1895 and Japan entered the politics and development of Shanghai. In the first few decades of the 20th Century, in addition to rising prosperity and worldwide prominence for its economic might and glamour, Shanghai gained an international reputation for drugs, gambling and sleaze. The use of opium was rife and the drug helped the foreign powers reinforce their grip on the city. It was only at the closing chapters of the Second World War, and only after the horrific occupation of the city by the Japanese, that Shanghai fully returned to Chinese control. However, even under Chinese control, Shanghai had to wait until 1992, when the then Chinese leader Deng Xiaoping, after seeing the huge success of the Southern Special Economic Zones such as Shenzhen (following the experiment to open up China‟s economy) decreed that it could modernise; Pudong’s skyline is testament to Shanghai‟s incessant desire to become the future.

Having just come from Beijing, a city I absolutely adored, I wasn’t blown away by Shanghai. It’s relentlessly commercial and modern and seemingly proud to be so. And why not? The city is the economic engine room of the new China. However, a great world city needs more than new banks, a spanking new stock exchange and glass and steel edifices in ever more futuristic designs. A great world city needs a world class cultural scene with globally renowned galleries and museums, stunning libraries and a burgeoning creative scene of all shades, in fields as diverse as literature, food, fashion, music and academia.

Thankfully, however, there were pockets of culture to be found in Shanghai such as in the brilliant art district at 50 Moganshan Road (a superb maze of warehouses and galleries in an excellent creative enclave), in the elegant former French Concession, and also in the invigorating warren of alleyways at Taikang Road, which was full of artisan shops, boutiques, galleries, cafes and restaurants; a great place to get lost in for an afternoon with your camera and a few Renminbi (RMB) in your pocket. 50 Moganshan Road is particularly interesting; it feels empty of visitors but that’s primarily because it’s so big; there are galleries and studios almost everywhere, behind decrepit buildings and tucked away behind shops. After browsing a few hit-and-miss galleries, I popped into a studio belonging to Zhang Zongmei, a photographic artist well-known in China. Zhang is about 40 years old with an infectious energy. He was incredibly friendly, and he invited me to join him and his apprentice for a fairly elaborate tea ceremony. Through his apprentice’s translation, we talked about our lives. He grew animated when he found out I was travelling. He wanted to know where I’d been and what I’d thought I’d taken from the experience. We talked haltingly about philosophy (my degree subject came out) and he tried to tell me something about a potential synthesis between Eastern and Western philosophy. Of Western philosophers, he was most fond of Schopenhauer and he laughed when I told him that I thought Schopenhauer’s ideas were life-denying. As I walked around his gallery and looked at his abstract photography, I had a strong sense of admiration for this artist’s way of life and his commitment to his vision; it’s something I’m drawn to but I wonder whether I have the balls to pursue full-time and without compromise. It was here in the creative districts and the alleyways of Shanghai that I felt I’d seen the real city.

The food in Shanghai, as expected, is fantastic and probably most famous for the varieties of dumplings on offer. Shanghai is the home of dumplings. The most famous are jiaozi, xiaolongbao, guotie and shengjian; all filled with pork and vegetables, some steamed, others fried, some containing a juicy broth and some eaten with finely sliced ginger and rice vinegar. My favourite has to be the shengjian; fried on one side and filled with a stunning broth from the cooking juices of the pork inside. These have to be eaten carefully as just chewing them in the wrong way often means the delicious, meaty, rich hot broth goes everywhere, burning your face and ruining your clothes! The best, and most locally approved, way of eating them is to pierce the top of the dumpling with a chopstick and then to suck the juice out of it and then eat the rest, preferably with a bit of fiery chilli paste – absolutely delicious! 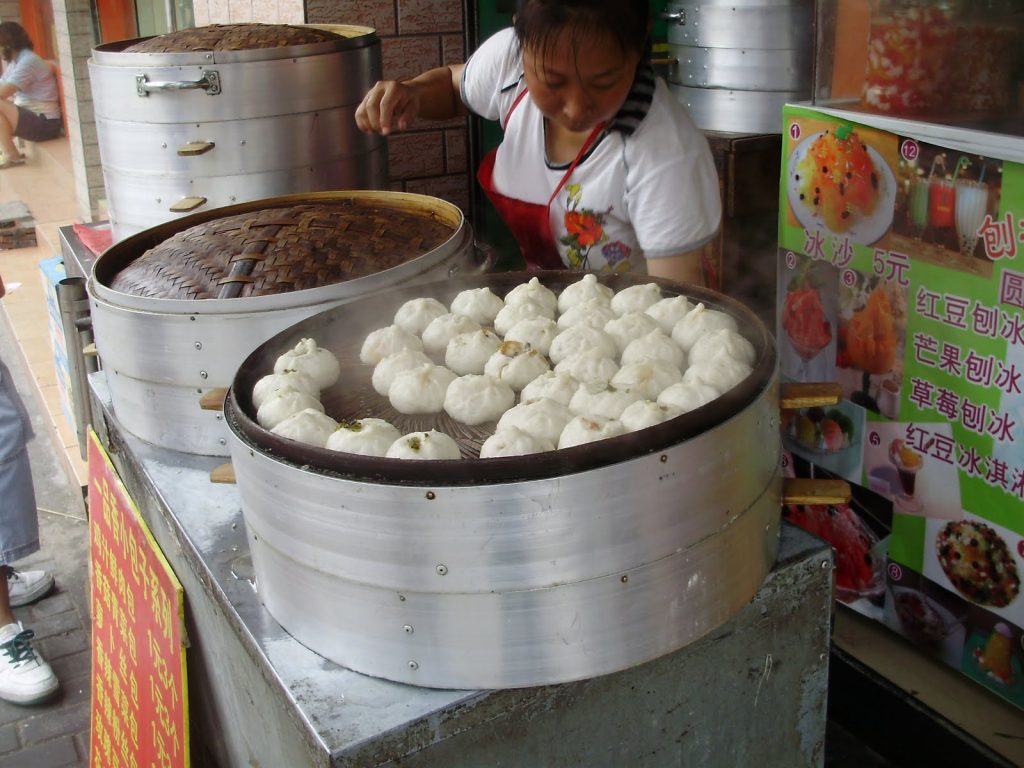 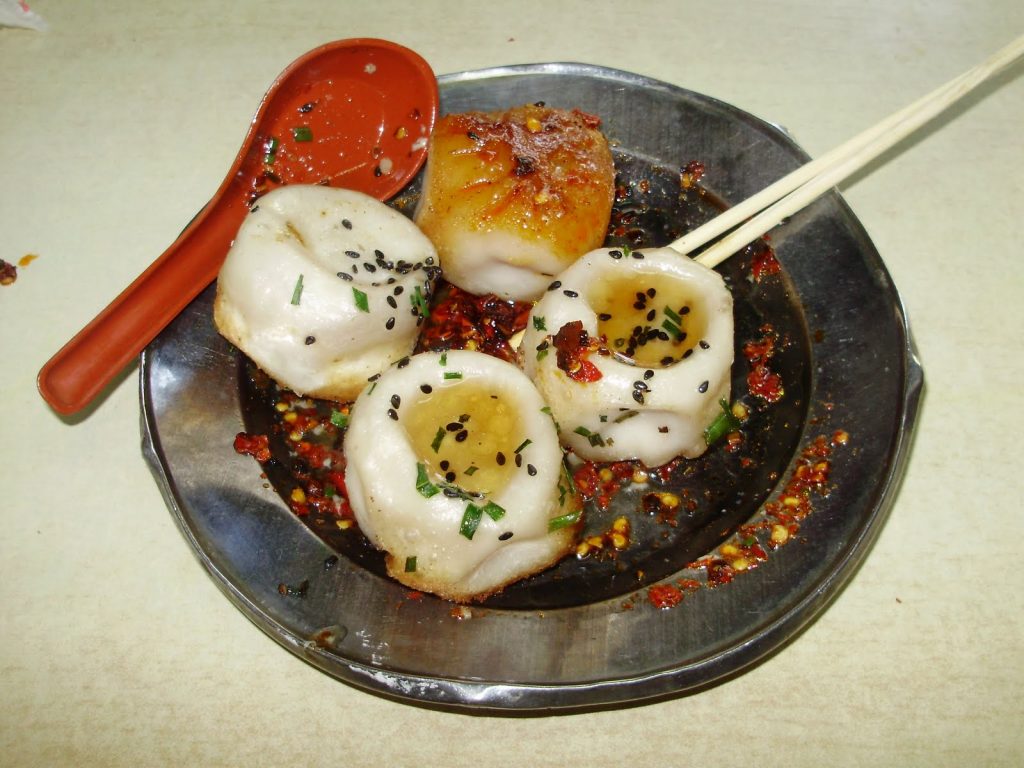 Shanghai is undoubtedly a huge part of the future for China but it’s just one face of its national identity. In a city where almost nothing is older than 150 years, it’s easy to forget that you are standing in a country whose history stretches back continuously more than 5,000 years. The skyline of Pudong is no doubt impressive but it left me cold. The colonial cityscape of Puxi was more interesting than Pudong but still nowhere near as fascinating as the mind-blowing sights of Beijing. Beijing somehow effortlessly combines modernity with the glory of its mighty past, and manages to merge looking firmly forwards to its future as the administrative centre for the world’s next superpower with its endless creativity and unshakeable cultural confidence. This definitely won’t be the last time I visit China; next time I’ll go to the west of the country; to Sichuan, to Tibet, to Xinjiang, to Shanxi etc. This country is huge and I’ve only just scratched the surface.