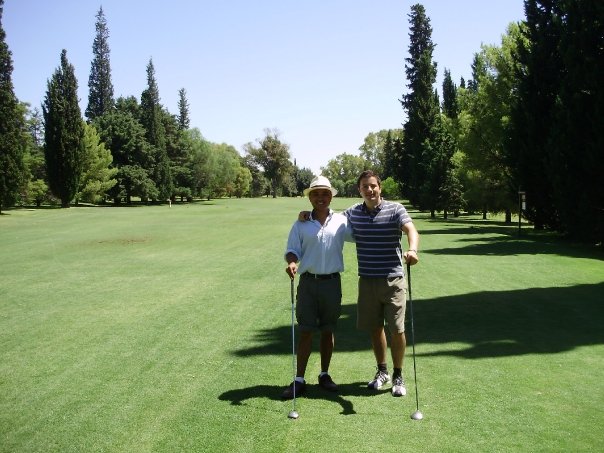 From Buenos Aires, we took an 18 hour bus ride west to Mendoza, a small city at the feet of the Argentinean Andes, on the other side of which is the Chilean capital, Santiago. It was fantastic to see the mountains again; after three weeks of cities, I was getting restless to see some new landscapes. Mendoza is famous for being in the heart of Argentina’s major wine producing area, for being the drop off point for mountaineers attempting Cerro Aconcagua (at 6,962m, the highest mountain outside of the Himalayas) and now for the being the setting of the inaugural Mendoza Cup.

Mendoza has a nine-hole golf course founded in 1926. It’s a mature, tree-lined parkland layout with narrow fairways and possibly the truest and fastest greens I have ever putted on. As we hadn’t played in over two months, we were desperate to play, and, to give the game some extra significance, we obtained permission from our society chairman, Dave Macaulay, to play the first overseas meeting of the C.R.A.P Golf Society – the first and, very probably the last, Mendoza Cup. We hired some clubs and set off with our mandatory caddy, Dario, for a hard-fought game in the blazing sunshine. Grant and I are evenly matched for sheer golfing mediocrity. Therefore, we played straight match-play off scratch. What followed was probably one of the most memorable rounds of golf I have ever played. 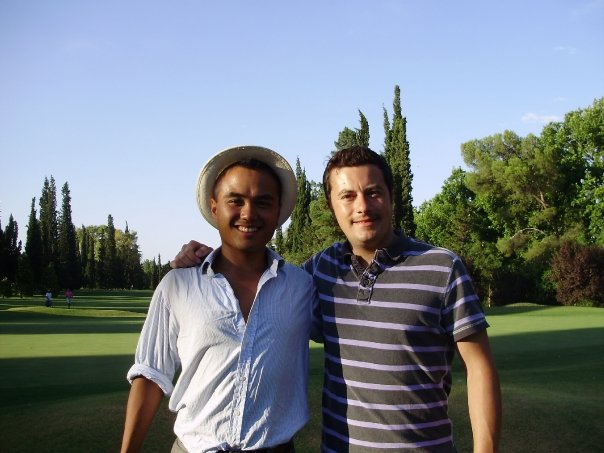 Me and Grant after the match with the shadows getting longer

From parts of the course, the snow-capped mountains are clearly visible; the sounds of crickets are ever present; hardly a soul was on the rest of the course and we played very reasonable golf enjoying the advice and tips of Dario, a truly top bloke. Affable, with a huge belly that hides the fact that he’s actually a five handicapper, he consistently teased us for some terrible shots and applauded our few good ones. Every time, we left a putt short, he would whisper loudly, “Lady!” For all his banter, we didn’t believe he was actually any good. “Go on then Dario, show us how it‟s done…” So he pushed a tee into the ground, waggled a driver a few times, swung the club around his body, and smashed a well struck shot 280 yards drawn around the apex of the dogleg. He seemed pretty pleased with himself! 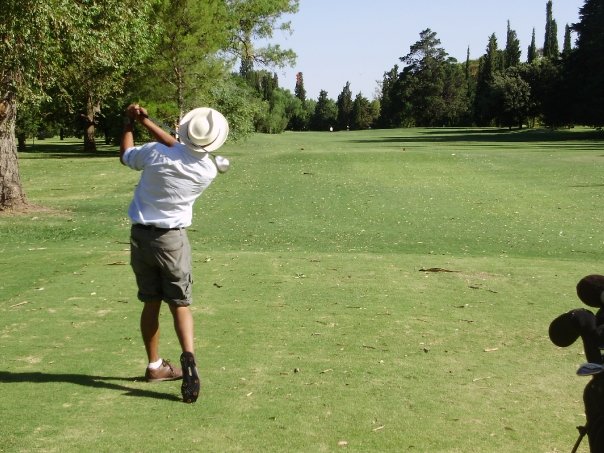 We broke for a long lunch under the trees and played the second nine holes in the late afternoon sun. On the 17th, with a putt for par, I completed a 3 and 1 victory to win the inaugural Mendoza Cup for the Nihontos. 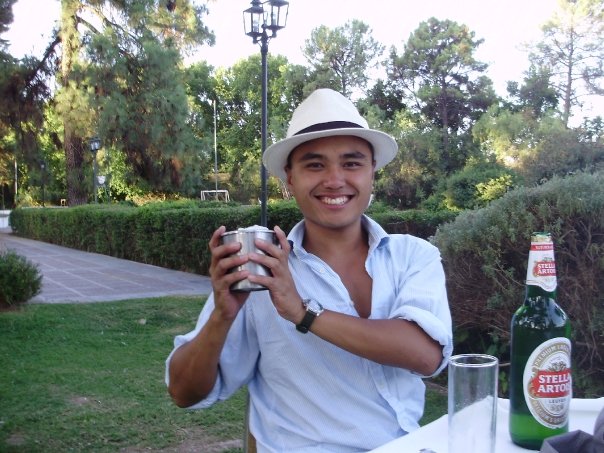 Winner of the inaugural Mendoza Cup

We met some interesting people in the hostel in Mendoza, in particular a lively guy from Northern Ireland called Jonny Kyle. Jonny had already been there a week by the time we arrived; he‟d come to attempt Cerro Aconcagua and had trained for months whilst working to save the money for his trip. Jonny had flown into Mendoza via Santiago from the UK and, unfortunately, the airline lost his main bag with around 2,000GBP worth of mountaineering kit, which he’d been unable to replace. He‟d been waiting for his insurance company to make compensation and was planning his next move. He eventually went south to Patagonia.

Unfortunately, on the morning of the day we were due to take the bus back to Buenos Aires, Grant had his small rucksack stolen. We were in an internet café when suddenly he jumped up and said he couldn’t find his bag. I‟ve never seen him so ashen-faced. I immediately had a sinking feeling that it had long gone and that everything of value that he owned was in that bag; his wallet, credit cards, passport and phone, they were all gone. It was a tough moment; luckily there were two of us to deal with the problem, and not just one person, all alone on the other side of the world with no money and no identification. Instead of wasting time trying to obtain crime reference numbers in Mendoza, we decided to speed back to Buenos Aires to the British Consulate to try and get an emergency replacement passport issued; we were supposed to fly out of Argentina to Sydney two days later! We almost weren’t able to get on the bus back to BA as Grant’s bus ticket was also in the stolen bag; and South American bus protocol demanded that the physical, paper ticket was more important than anything; without it, you couldn’t board. Our lack of Spanish was never starker than in those last few hours in Mendoza. Eventually, I managed to persuade some local policewomen to help us with our negotiations with the bus company. With just minutes to go before the bus (the last of the day and the one we had to catch if we were going to get an emergency passport issued in time) was due to leave, the entire bus company and station police were able to hold the bus for us and wave us off. I couldn’t work out who was more unlucky: Jonny for losing his luggage or Grant for having his bag stolen.

Back in Buenos Aires, the British Consulate in Recoleta was staffed almost exclusively by Argentines; part of an outsourcing drive I suppose. Unbelievably, the Consulate was only open until 2pm; we needed that passport before 11am the next morning and we’d aim to collect it on the way to the airport. Alfonso, the official in charge of reissues, assured us that he’d deal with it but with no promises made. I thought the best course of action, should Grant not get a new passport in time, was to fly without him and leave him my credit card. After, an angst-ridden evening, luckily, the next morning, Grant was issued an emergency replacement (shows what’s possible) and, the next day, we flew the 15 hours westwards to Sydney, across the International Date Line and the Pacific Ocean.