Huayna Potosi is a mountain in the Cordillera Real, the ‘Royal Range’, a 160km range between the Highlands and the Lowlands not far to the north of La Paz. It’s a beast of a mountain, and at 6,088m, 88m above the magical 6,000m mark. We‟d read that it was fairly straightforward to climb (as mountains of this scale go) and we were in a super-confident mood. We‟d acclimatised well; we‟d been at more than 3,000m for two weeks now, with no ill effects. Any fatigue had long since gone and we were in strong, rude physical health. We booked our attempt with the same guys we‟d organised our Uyuni trip with and, with deposit paid, we were fitted out for boots and ice clothing. 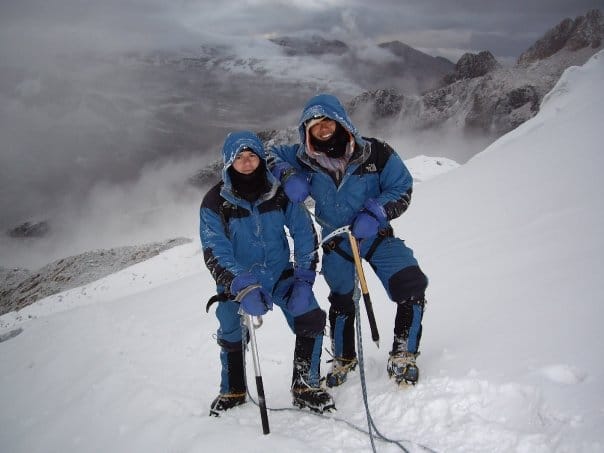 We met our guides the next morning, David and Macario. Both were small, tough-looking Bolivian men with small tattoos on the backs of their left hands; we later found out that these were acquired during previous military service. Neither spoke much English and, again, with our continued lack of passable Spanish, we hoped that this inability to communicate wouldn‟t prove too much of a problem on the mountain. We‟d reached the stage where we could ask questions but perhaps without the correct prepositions or with an incorrect emphasis. We rarely understood the response, however, and generally tried not to look puzzled; we‟d just nod and say “Si, Si!”! I swear that our interlocutors were probably wondering why the hell we‟re nodding and just saying “Si, Si”!

Not Even Close to Lost In Translation Act One, Scene One

Any quintessentially South American location
Enter Grant and Ed talking amongst themselves with dog-eared phrasebook in hand:

Any random South American person: “So, you two are Gringo twots who come to South America armed without even a word of Spanish? Haha! You idiots! Are you stupid?!”

We made our way to base camp at around 4,700m, and from there trekked up a scree slope to the refugio, a spartan wooden hut at around 5,100m, a place so spartan that there wasn‟t a toilet there; you just did your business outside on the rocks surrounded by mountains. Up there, exposed on that mountainside, was probably the coldest piss I‟ve ever taken. The walls of the refugio were covered with graffiti recording climbers‟ attempts on the summit, various posters of famous peaks such as Everest and Aconcagua, and photos of the mountaineering elite; we felt like interloping amateurs, which of course we were! We met four people up there: an attractive young German uber-couple who were PhD chemistry and physics students. It turned out that they were, I shit you not, cycling around the world. They had just stopped off to climb Huayna Potosi! These types of people put regular achievements into perspective somewhat. We also met Ralf, a young and engaging Swiss guy, and another German guy whose name I don‟t recall because he promptly left the refugio due to altitude sickness. The air is very thin at this altitude and even in the daytime, it was freezing. We ate a mountainous (sorry!) supper of spaghetti at 5pm and retired to bed on the upper floor at the insanely early hour of 6pm, wearing five layers of clothes, gloves and a beanie, still freezing our nuts off. 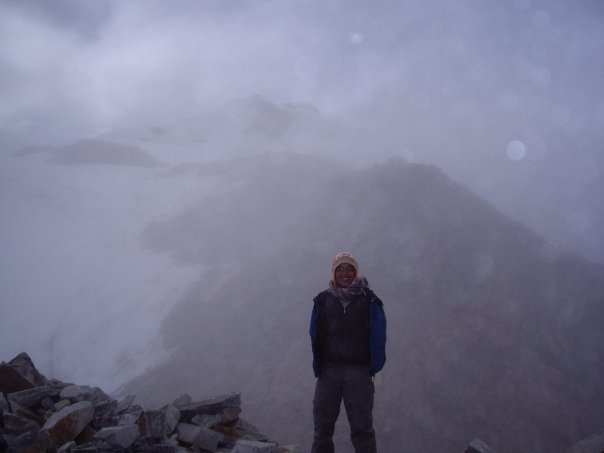 Macario woke us at midnight for a spot of breakfast and we set off to attempt the summit at 1am. We were wearing long-johns, two pairs of socks, 5 upper layers, a snow jacket, trousers, gaiters, a balaclava, a hat, two pairs of gloves and, outside, we put on our crampons, ice axe and harnesses and we were given quick instruction in glacier climbing techniques, with the use of ropes, ice axes and crampons. We were roped together, with Macario leading, me second and Grant behind, each about ten metres apart. It was pitch black (apart from our head torches), snowing fairly hard and we were each focussed on the few feet in front of us. It was so cold. Even walking up a gentle slope was extremely tough. After an hour or so of steady climbing, our first real surprise was seeing Macario jump over a crevasse. We looked at each other thinking, “What the fuck?!” I looked at the crevasse. It was pitch black inside and I couldn‟t determine its depth. It was more than a metre to the other side and slightly uphill. Macario dug himself in with his crampons on the other side and tightened the rope. He beckoned me over; I steeled myself, jumped and, lying into the slope, dug my axe into the other side and heaved myself clear. I looked back at Grant, dug myself in alongside Macario and reassured him that it was fine. Grant cursing a bit jumped. This was turning out to be a bit more extreme than we expected! There were more surprises to come such as traversing narrow ledges with a sheer drop to one side and more crevasses. We wondered whether Macario actually knew his way to the top. 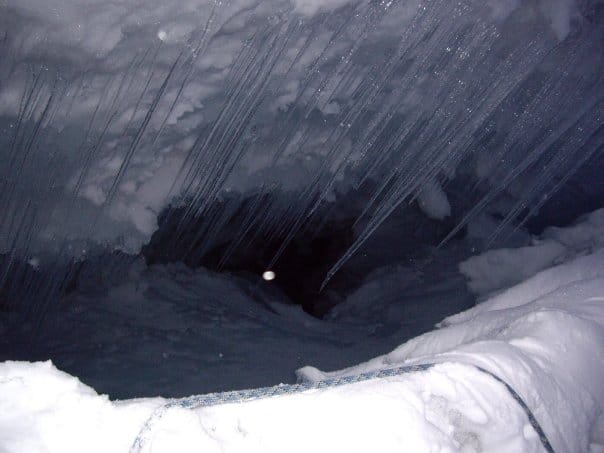 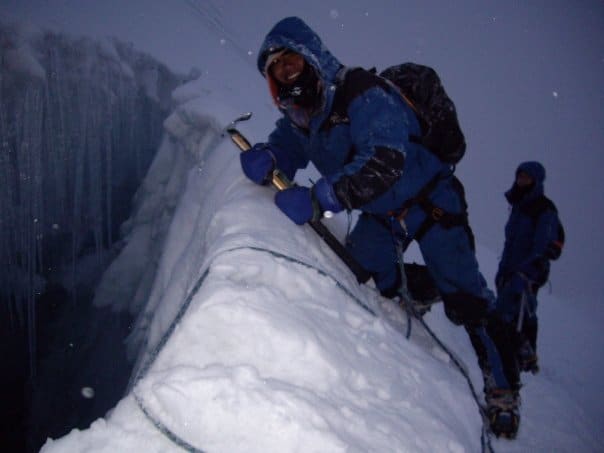 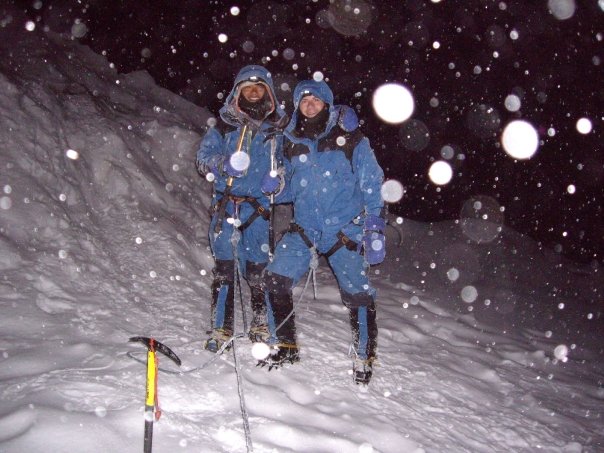 After four hours, we reached a steep slope with an incline of about 45 degrees, where the trail was a narrow ledge with a sheer drop to our left and a sharp fall to our right with a crevasse far away at the bottom. We watched with keen apprehension as snowballs dislodged by our crampons nudged towards the fall-away and hurtled down the slope into the crevasse. About a hundred metres up this slope, we were struggling to make progress. I found the ice technique challenging; it was similar to principles of skiing i.e. use your edges (we were trekking sideways uphill), easy to say but much harder in practice. Macario was increasingly worried about our group safety; more than a few times, we were scrabbling for grip with our crampons and axes and sliding backwards at every step. He would have to dig himself in whenever he felt one of us wobble. It was a tremendously tough decision to make at that altitude, at that time in the morning, knowing the acute disappointment we would feel if we turned back, but we decided to turn around and begin our descent. Serious injury or worse now seemed a greater, and more realistic, possibility than at any previous point of the climb; safety was paramount in our minds, so we turned back. Macario congratulated us telling us we had reached 5,650m and, whilst of course incredibly disappointed at not reaching the top, we were pleased to have reached this altitude; easily the highest either of us had ever been before. It was difficult to enjoy the moment; we were emotional, both positively and negatively; we were exhausted physically and mentally; and it‟s never good for your soul to shrink back from a challenge or obstacle.

On our descent, the light increased steadily and the views became spectacular. The peak above and behind us was coldly beautiful, and, perhaps because we had failed to conquer her, she was utterly dominating, daunting and dreadful. The surrounding peaks of the Cordillera Real juxtaposed against a huge black cloud truly imposed a sense of fear and wonder, but mostly fear! I don‟t think I have felt so much adrenaline before over such a sustained period of time; it was an experience I’ll never forget. It won’t be my last time in crampons and, one day, I’ll give Huayna Potosi another go.