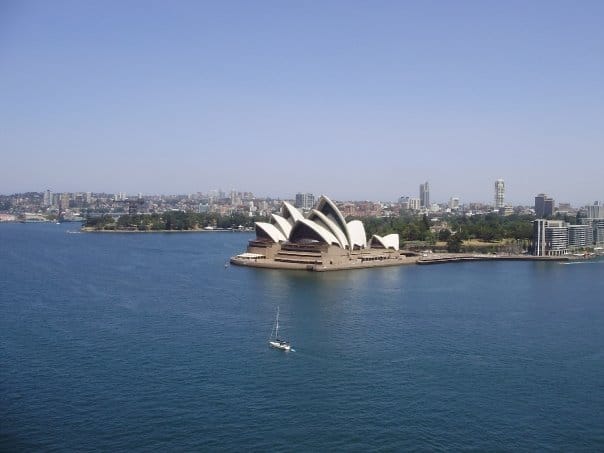 AUSTRALIA IS AN enormous country; it‟s the smallest of the seven continents and, at a more than mighty 7,600,000km2, it‟s the sixth biggest country by land-mass in the world. Australia shares no land borders; it‟s surrounded by New Zealand to the southeast, by Indonesia, East Timor, and Papua New Guinea to the north, and by the Solomon Islands (an independent nation with a constitutional monarchy with Queen Elizabeth II as Head of State), Vanuatu, and New Caledonia (a non-self governing French Territory due to vote on independence between 2014 and 2019) to the north-east. Australia is a federation of six states and two major mainland territories, each with their own capital. The states are New South Wales (its capital is Sydney), Queensland (Brisbane), South Australia (Adelaide), Tasmania (Hobart), Victoria (Melbourne), and Western Australia (Perth). The two major mainland territories are the Northern Territory (Darwin) and the Australian Capital Territory (Canberra – the capital of Australia and the seat of the Federal Government). Australia has around 22 million people of whom around 92% are white (predominantly of European descent), 7% Asian (mostly of Chinese and Vietnamese descent), whilst Aborigine (mainland Aborigine and Torres Straits Islanders) and others account for around 1%.

We arrived in Sydney, on the south-east coast of Australia, on 22 January 2009. On the recommendation of another traveller, we stayed in Glebe, a suburb of Sydney. It‟s close to the University of Sydney and has the reputation of being one of the more bohemian areas of the city. It‟s quite far out of the CBD; about 25 minutes‟ walk to George Street in the centre. It was the first time that I saw long-termers in a hostel; Matt, a guy in our incredibly hot dormitory, had been there on and off for two months. Before that, he‟d been working on a fruit picking farm. The conditions there, he explained, had been borderline unbearable. Temperatures would rise to around 40 degrees Celsius in the summer months but it was the flies that he couldn‟t stand; they were everywhere. That would be another side of Australia that we‟d experience in the Red Centre; but for now we were keen to explore Sydney.

Sydney is a city of incredible vistas. The feel is truly that of a confident world city, with its high rise skyline, huge numbers of tourists, the world renowned and iconic Opera House, the huge Botanical Gardens in the very centre of the city, and the outdoorsy focus of the people who are always running, cycling or swimming.

It’s a great place to be a tourist as all of the major attractions are within striking distance of the central CBD. The Opera House is an amazing building that‟s stunningly original and dominates Sydney. Once you’re in front of it, looking across the harbour at it or standing right next to it, it’s impossible to imagine Sydney without it. We walked over the equally iconic Harbour Bridge and took in Luna Park and Kirribilli. From this side of the harbour, you can gaze back across the water at the Opera House. It‟s incredible to think that when this was commissioned and being built, there was strong opposition to it, whereas it‟s now recognised as one of the great buildings of the world. It‟s clear that the Opera House has an elevating effect on the city as a whole and it‟s powerful evidence that great, bold and innovatively designed buildings and public art can have an immeasurably positive effect on people‟s well-being. Nearby are the Botanical Gardens and the Domain, beautiful spots of green parkland right next to the CBD, which must have also been conceived with Sydneysiders‟ well-being in mind. It‟s beautiful, vast, and ambitious; it has fantastic views of the water and is filled with diverse trees and plant life and its very own population of fruit bats. It was here that the Sydney Festival had been running throughout the summer, putting on huge scale events such free concerts. We saw free symphonies one weekend and, on the next, free opera playing to around 60,000 people in open air arenas: spectacular stuff! To the south of the Botanical Gardens is the State Library of New South Wales (where I met some great staff who showed me great Australian spiders and bugs) and the New South Wales (NSW) Art Gallery, a stunningly designed building. I love this gallery and, in particular some paintings by the Australian artist, Sir Sidney Nolan, depicting the Red Centre. Seeing these made me yearn to go to the famous Outback.

It was a definite change of pace in Sydney. From two months on a continent where almost no-one spoke English, suddenly we were surrounded by everyone speaking English. It was like being transplanted back to the UK, except that here it’s about 35 degrees everyday! This wasn’t “real‟ travelling; it was just too easy! A big shock, though, was the price of everything. In 2007, 1 Pound Sterling (GBP) could buy nearly 3 Australian Dollars (AUD). Now, in January 2009, 1GBP could only buy 2AUD; a wallet-tightening, deeply depressing drop in purchasing power of 33% in less than two years! My preferred measure of purchasing power parity is the pint: a pint or schooner of beer costs around 9AUD or an exorbitant 4.50GBP (as opposed to 3GBP on average in the UK). Living costs are high in Australia and that’s not great for backpackers. We watched the cents and cut down on the boozing and lived off cheap sushi rolls and pasta. The prices also helped explain the popularity of boxed wine amongst backpackers in Australia; unlike boxed wine in other countries, here, it isn’t really proper wine, it’s weak (around 9-11%) and is rumoured to contain some type of fish extract/protein. It tastes pretty rank and delivers brutal hangovers, but, given its relative cheapness (4 litres for next to nothing), it was perfect. 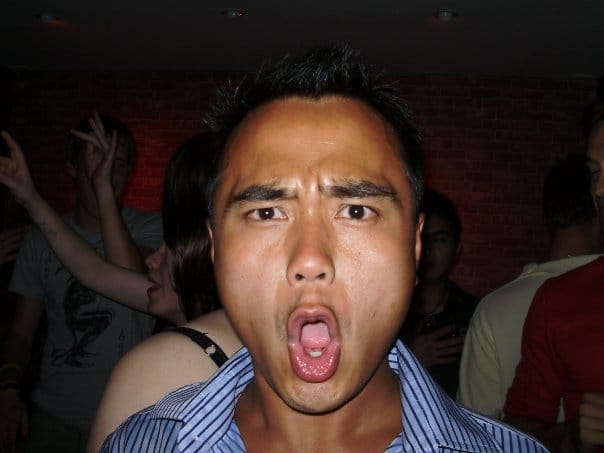 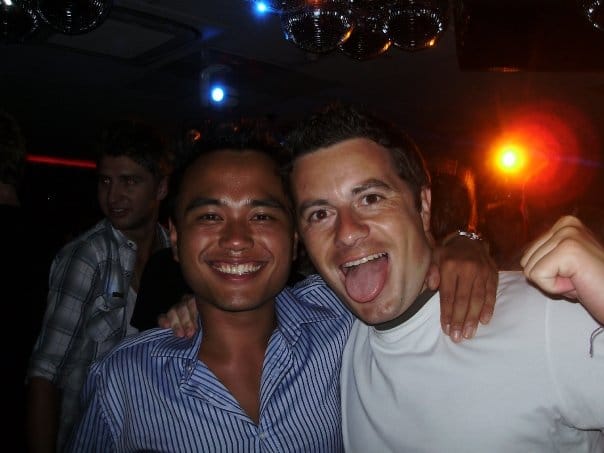 Sydney was a shock to the system in other ways as well. The outdoorsy and sporty lifestyles of Sydneysiders brought into sharp relief that two months of good South American living had taken its toll on our waistlines: we‟d become fat bastards! Too many lunchtime beers and too many empanadas! We couldn‟t help but absorb the healthy outdoorsy lifestyle of the Sydneysider with daily jogs; how much more picturesque can you get for a run; past the Harbour Bridge, up the steps of the Opera House (a la Rocky), past the Botanical Gardens to Mrs Macquarie’s Chair looking back across the harbour. Sydneysiders are also obsessed with swimming and, in Wooloomooloo Bay, we went to probably the best swimming pool I’ve ever been to, the Andrew (Boy) Chorlton. It’s open-air and suspended over the sea on a decking and glass structure with water that had a slightly salty tang; just spectacular. 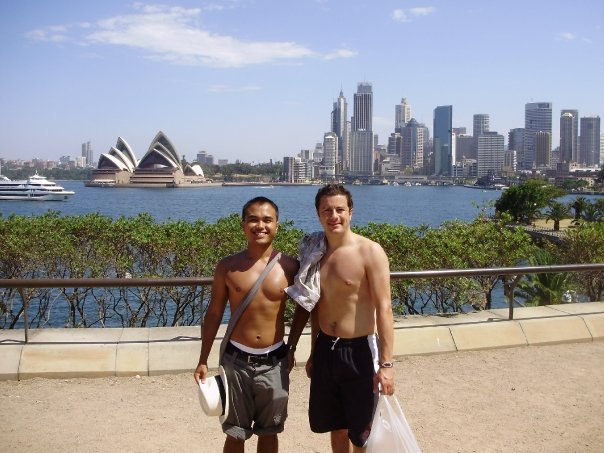 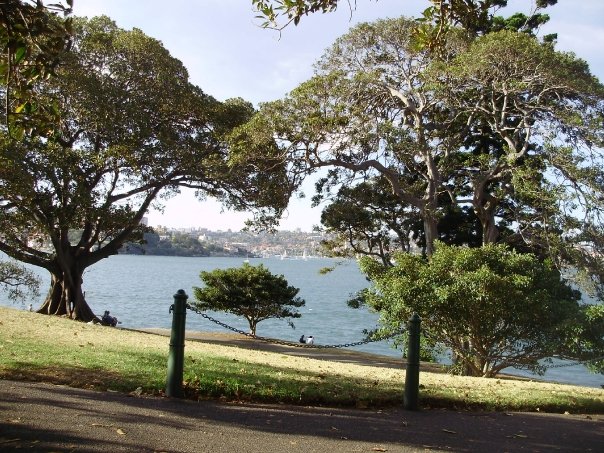 Sydney was definitely different to my expectations. I expected the Aussie stereotype: party people with healthy appetites for alcohol and barbeques etc. so I was surprised by the slightly puritanical attitudes to boozing that I found in Sydney. There are now recently passed strict laws as to serving alcohol in pubs and bar-staff are obligated to refuse service if they believe the customer is too drunk or else they face a heavy fine. One evening, I was having a few drinks with two guys from Brisbane; it developed into tequila shots at the bar and, whilst they were a bit drunk, they weren‟t at the stage where they were falling over. Despite this, they got thrown out by overzealous bouncers and barstaff at the laughably early 8.30pm. Even worse than this, the bar’s last orders were at the ridiculous time of 10pm! 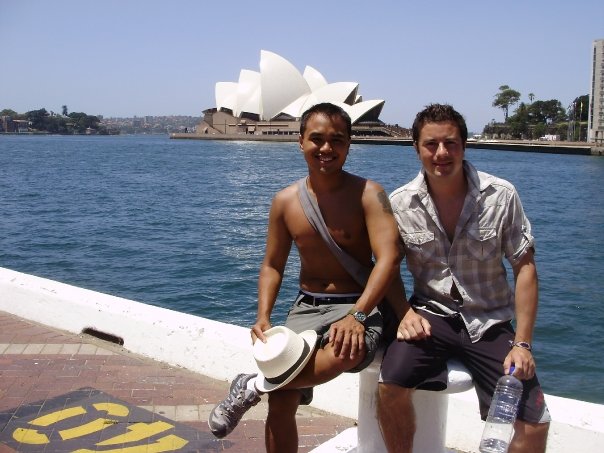 However, one of the biggest surprises for me was the multicultural nature of Sydney. Of course, with Sydney being a world city, I expected diversity of sorts but definitely not on this scale. In particular, there’s a huge number of Asian people (in Australia, oriental people are called “Asian”). I‟d say that maybe 20% of people in Sydney‟s Central Business District (CBD) were of Asian origin. Having just flown in from South America (where I probably saw a total of three Asian people), this was a welcome change. In particular, from a personal point of view, it meant that I could enjoy some Chinese food for the first time in two months in the extensive Sydney Chinatown (classic backpacker territory, where we also watched Rafael Nadal win the Australian Open Final).

Whilst Sydney is multicultural and diverse, I saw very few of Australia‟s indigenous people, the Aborigines. Before arriving in Australia, I‟d heard that Aborigines had the longest continuous culture in the world (some 40,000 years) and I expected to see some Aboriginal people in the city. I knew that the Aboriginal people and the settlers from Europe had had a very troubled past; so much so that the Australian Prime Minister, Kevin Rudd, had recently issued a formal apology to the Aboriginal people for past suffering inflicted upon them by the settlers. The relationship between indigenous and non-indigenous people is still very much at the forefront of national debate here, as illustrated by the controversy surrounding Australia Day on 26th January; an annual national holiday intended to celebrate the concept of Australia as a nation. From where we were in Sydney, there wasn‟t much in the way of partying on Australia Day; in fact, it was a complete wash-out. There‟s an element of the population (primarily a section of Anglo-Saxon Australians) that aggressively waves the Australian flag (it‟s blue with a Union Jack in one corner and the stars of the Southern Cross on the remainder. The Southern Cross (also known as Crux) is a constellation of stars most easily visible from the Southern Hemisphere, of five stars, the brightest four of which form a kite-shaped cross. The Southern Cross also appears on the flags of Brazil, New Zealand, Samoa and Papua New Guinea) on Australia Day and gets involved but most people appear more reticent when it comes to beating the drum for “Australia Day”. The next day in the major newspapers (the excellent The Australian and The Sydney Morning Herald) I saw an indication as to why this might be: The date chosen for the national holiday to celebrate the concept of the nation of “Australia” happens to be the date that the British First Fleet arrived in Sydney Cove and is the date that the British flag was first raised in Australia. Amongst many Australians, particularly many indigenous people, this date is known as “Invasion Day” (an emotive nickname if ever there was one!) and it‟s clear that they‟re not going to be whooping with joy to celebrate anything on this date. With this kind of controversy, polarity and high-profile debate over just one issue, it’s clear that the healing process between the indigenous and the non-indigenous peoples of Australia still has a very long way to go.

After about 10 days in Sydney, we were spending far too much money on just accommodation and food alone, so we decided to leave as soon as we could and kick-start our Australian travels. Before leaving, we met with my sister’s boyfriend’s brother, Luke Benedictus (who had moved to Australia some years before. He’s a journalist for Men’s Health in Australia and was in training at the time for a feature on white-collar boxing.) and his girlfriend, Anja, and they very kindly had us round for a lovely dinner in Elizabeth Bay, on the Sydney coast.