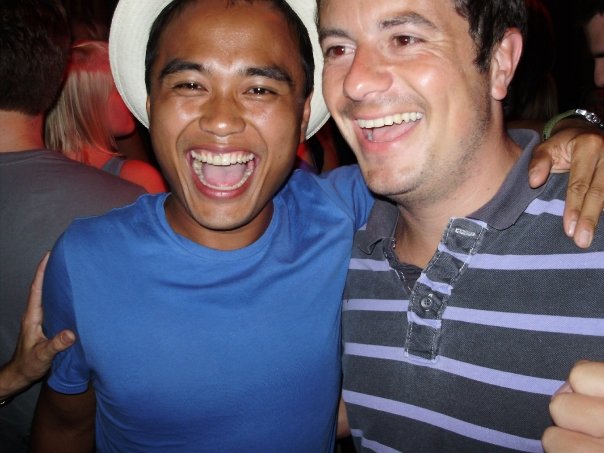 After Cairns, we flew into Alice Springs in the south of the vast Northern Territories (The Outback State); a place almost slap-bang in the middle of Australia. It’s another example of how big this country is: it’s 2,500km by road from Cairns in the far north-east to Alice Springs in the very centre. I’d been looking forward to this for ages, ever since arriving in Sydney. I wanted to see the “real Australia” that I’d had in my mind from the UK; the Outback and the famed red dust. During the approach into Alice Springs, I could see the red desert below.

Alice Springs is a city in the middle of nowhere! It sits amid the spectacular McConnell Ranges and there‟s absolutely nothing around it. Darwin is more than 1000km to the north and Adelaide is around 1500km to the South. The first thing you notice in Alice Springs at this time of year (the height of summer) is the extreme heat (around 40 degrees Celsius and just on the edge of bearable). The next thing you notice are the incessant, ever-present flies. They’re easily the most populous creature around here. The things are apparently attracted to the protein in your skin and, for as long as it’s daylight, they never leave you alone. They get in your eyes, your hair, your nose and, worst of all, they’ll rest on your lips if you let them. Horrible when you know where they’ve been! Every tourist wears a fly net like a veil over their head.

From the top of nearby ANZAC Hill, you can see the whole town. It’s the classic Aussie town that non-Australians carry in their minds about the Outback. It’s not very big and is surrounded by absolutely nothing; just red desert. 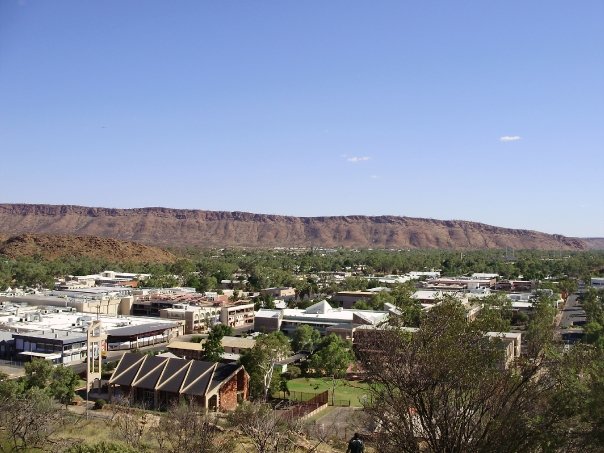 Alice Springs has the feel of a frontier town, the life-affirming feel of the Wild West. There’s only about 30,000 people here and, somewhat surprisingly, Alice is reportedly the lesbian capital of Australia, with the highest percentage of lesbians in any town or city in the country; it genuinely is a diverse and welcoming place. It’s got some of the harshest terrain I have ever seen. There’s hardly any green at all and it’s more arid than any land I’ve ever come across. Some wildlife does seem to flourish here though such as the rock wallaby, a marsupial not unlike a small kangaroo (they‟re very laidback and gentle to the point where they’ll even eat out of your hand). 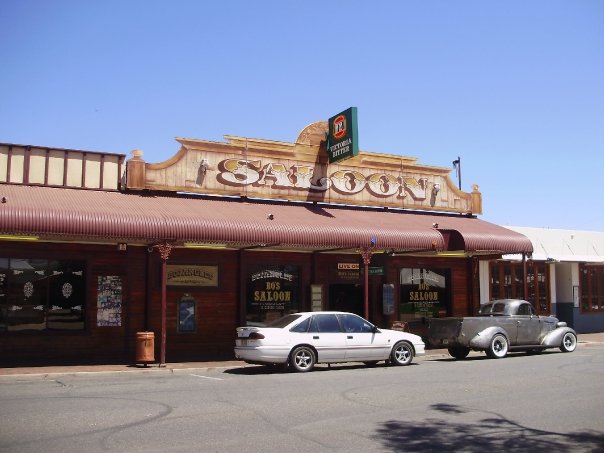 Unfortunately, Alice Springs also has some serious social problems. I‟d previously seen little of Australia‟s indigenous population. I‟d seen very few Aboriginal people in Sydney and very few in Cairns. However, here in Alice Springs, a significant percentage of the population is Aborigine. In the week that I was in Alice Springs, I noticed that there were significant numbers of Aborigines sitting all day under trees ostensibly doing nothing at all. It wasn’t until after a few days that I learned that there was a serious alcohol abuse problem within the indigenous community in Alice Springs. Aborigines of all ages are drunk a lot of the time. The problem is so great that all liquor shops have restrictions unique to Alice Springs on the amount of cheap alcohol that can be bought. For example, no boxed wine can be bought before 6pm and, when the boxed wine does become available after that time, it’s available in smaller quantities than other parts of Australia, and only one box may be bought by each person per day with photo identification being mandatory. It wasn’t just in the bottle-shop that I saw this problem; one time, I was walking through the centre of Alice Springs, when a clearly drunk Aboriginal man politely asked me to follow him into the bushes. I couldn’t think of any good reason to go with him, even in the interests of cultural exchange! I politely declined his invitation and he promptly let fly with a volley of abuse; I walked away pretty quickly.

With regard to the problems and issues facing Australia in respect of the indigenous population, having been in the country for less than a month, I‟m in absolutely no position to assess the issues. However, even from my limited outsider perspective, the gulf between the widely-held desire for the indigenous population to integrate into society and the extremely sad reality is enormous. It truly seems that British settlement was a disaster for the Aborigines, the vast majority of whom were displaced from the lands they lived upon, and suffered not only many decades of mistreatment, but also the devastating impact of imported disease and alcohol (apparently, their bodies are ill-equipped to process alcohol). It‟s unimaginable that Aborigines would be able to return to their previous way of living even if they wanted to. The only viable alternative is their eventual integration into Australian society. Of course, one of the biggest means to this is through employment, although this is difficult to encourage when literacy levels and educational standards across the community are well below par. The most astonishing and saddening statistic I‟ve heard regarding the Aboriginal community is that their life expectancy is nearly twenty years shorter than that of non-indigenous Australian people, the average life span of an Aborigine being around just 58 years old. The issues surrounding the Aboriginal peoples are enormous and solutions are not apparent. But the only thing that‟s clear is that the current situation is completely unacceptable. I don‟t think that the absence of solutions is down to a lack of political will; on the contrary, even from the outside perspective of a traveller, I sense a feeling of deep guilt from many parts of Australian society over the current state of the Aboriginal community and, whilst solutions may not be forthcoming, people will surely support anything that‟s an improvement on the current situation.