I’ve done this challenge twice now. Once in 2010 and again in 2012. It’s an awesome experience and I wholeheartedly recommend it. In 2010, I did it with friends from school, Dave Macaulay and Grant Rowley, and Dave’s dad, John Macaulay. In 2012, I did it with some friends I’d made from a trip to Kilimanjaro earlier that year.

What is the 3 Peaks Challenge?

You have to successfully summit and successfully come down the three highest peaks in Scotland, England and Wales (Ben Nevis, Scafell Pike, and Snowden) in no more than 24 hours. It doesn’t matter how you do it and in what order.

So say you start at the bottom of Ben Nevis at 4.30pm, you have to finish Scafell Pike and have summitted and returned to the bottom of Snowdon by 4.30pm the next day.

It’s not easy and relies on good fortune with the weather and good traffic conditions. A traffic jam between peaks can kill your challenge.

It’s a classic challenge and a pretty difficult one to complete successfully. There’s a real sense of achievement.

You see incredible scenery in some of greatest wildernesses of the UK.

You need a great team

It’s possible to do this yourself in theory or with just yourself and a driver. But where’s the fun in that? Get a quality group of mates together and commit to doing a challenge that you’ll be able to look back on with fondness and pride.

What makes a great team member? Someone who doesn’t whinge when things are getting a bit tough and someone who doesn’t rely on the team to drag them through. They need to be someone who will stay cheerful in the face of adversity and will add something to the group. We all know who these people are. People who genuinely relish a challenge.

I’ve been lucky enough to have had great teams on both occasions, everyone being highly positive, enthusiastic people.

You need a GREAT driver

This is more important than almost anything. It’s your driver that’s going to hammer it from mountain to mountain, in the dark for most of it, with little to no sleep and through the night on single lane winding roads and dual carriageways. More often than not, he or she will be driving a minibus, a vehicle that they’re unfamiliar with. They will not have the glory either of actually completing the challenge despite being integral to it.

Our driver in 2010 was my friend’s dad, big John Macaulay. He was a great driver. He had a big Volvo off-road 4×4 and was a quick driver. John is a former RAF officer and British Airways captain and was really up for the challenge. He got us from mountain to mountain in double quick time and was a fantastic support.

Our driver in 2012 was Mike Hibbert, who came on the Kilimanjaro trek earlier that year.

When to do it

You want the longest days possible with the most sunlight. You definitely don’t want to be climbing down mountains in the dead of night. With this in mind, you want to be going in June. June 21st is the Summer Solstice and the longest day of the year. The further north you go, the longer the days are. At Ben Nevis, the sun will be up until 10pm.

The only downside of going in June is that the peaks are very busy because everyone else doing the 3 Peaks has had the same idea! Although I think it’s quite nice to be part of a movement.

What order to do the Peaks?

Both times I did it, we started with Ben Nevis, then to Scafell Pike, then to Snowdon.

You don’t need boots. I saw people doing it with trainers. The downside of trainers is the lack of ankle support but the advantage over boots are that trainers are more lightweight.

Bring a lightweight rucksack with no more than 25l. You don’t want to be lugging a huge back pack with you.

Take at least a litre of water on each mountain and some high calorie food such as Sureen malt loaf. You don’t want too many sweets as your blood sugar will just spike and crash.

You want waterproofs. The British weather is notoriously changeable and showers are to be expected.

I recommend several pairs of anti-blister socks, at least one fresh pair for each mountain.

A team t-shirt is worth the effort.

An external phone battery to charge your phone for photos.

Lip salve (Vaseline or Neutrogena). It gets very windy up there.

Don’t forget a hat and gloves. The top of Ben Nevis is sub-Arctic all year round. It gets bloody cold up here!

Walking poles are not essential but are very useful for balance both uphill and downhill.

You’ve got to train. It’s not a straightforward challenge. There will be times when you have to pick up the pace to make the time limit. In 2012, I had to run the last 2 miles with a backpack to make the deadline. It’s a long way home if you didn’t make the time.

Get miles into your legs

Walk everywhere. Do at least 10,000 steps a day. Your smartphone will have an app for this. If in doubt, download a step counter app.

Get used to walking uphill. Take the stairs wherever possible.

Run at least 15 miles a week. This will help immensely. The foundation of fitness you will build doing this will see you in good stead.

Do long walks on the weekends. In 2010, I walked from Dorking to Guildford, about 12 miles. Check it out here. In 2012, I trained by walking up and down Box Hill, the highest hill in Surrey. Find whatever you can and train.

Aim for a 4.30pm start at Ben Nevis. There’s a bridge there that is the starting point. Allow for 4-5hrs to get up and down Nevis. This means that you’ll be coming down in the twilight but not in pitch darkness.

From here you’ll drive 4hrs to Scafell Pike and start that in almost darkness at 2.30am. You’ll be down at around 7.30am and from here it’s a race against time to get to Snowdon. Remember you’ll have to get down from Snowdon into the carpark by 4.30pm.

Between Ben Nevis and Scafell Pike, try to get some sleep. you might get one or two hours and this will stand you in good stead for the next two mountains.

Be careful with your steps. There is a variety of different terrain on the mountains. There are stretches where there are big steps in the path. Nearer the top, there are large areas of scree (small stones). It’s easy to lose your footing and twist your ankle, which would put an end to your challenge.

It’s a marathon, not a sprint. Don’t dawdle but don’t do yourself an injury either. 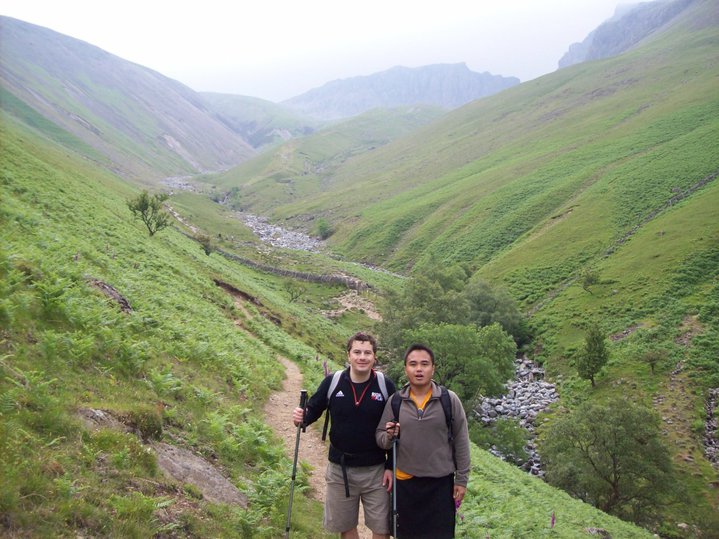