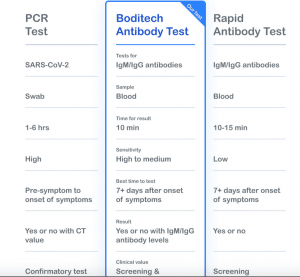 Even though I was pretty sure that I had coronavirus back in March, I still wanted confirmation of that by test. Up until now, the tests for antibodies have had some bad press for not being too accurate, but there is a test centre in Hammersmith which uses South Korean tests which have high specificity and high sensitivity, as opposed to tests that have high specificity but low sensitivity. Here’s a screenshot of the test compared to other tests (taken from the Corona Test Centre’s website):  The antibodies they are looking out for are IgM and IgG. IgM are produced around the time of the infection and during recovery, but tail off some time after the event. IgG are also produced around the time of infection and they stay around quite a lot longer than IgM after the event. Here’s a screenshot from the Corona Test Centre website of the …[Read More]