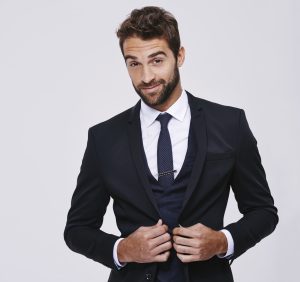 [toc] How to buy a suit – introduction We’ve all seen the guys on the cover of men’s magazines like GQ and Esquire. They look likeable to us. How do we know this? Because if they weren’t likeable, then there’s no way that any editor worth his salt would put them on the front of their magazine. What do we see when we look at the cover? We see a man we probably recognize from the world of sport, music or film. He’s usually smiling. An open, warm grin. He’s usually in a great suit. Combined with a crisp shirt and a quality tie. How would you describe him? We’ve had likeable. What about successful? Jet-set? Winner? Maybe for a split-second you think, “Wouldn’t it be great to be him? Live his life? It must be awesome…” Then you trail off. Even in your own head, you stop yourself. You …[Read More]